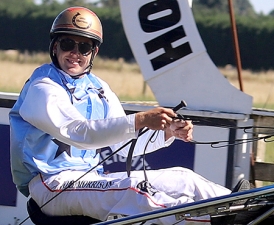 John Morrison. Photo supplied.John Morrison will be out to follow in the footsteps of his childhood idol at this year’s Norwood New Zealand Rural Sports Awards.

The talented young horseman was this week named a finalist in one of the five award categories at the annual event – the Young New Zealand Rural Sportsperson of the Year.

He’ll be out to emulate not only the deeds of legendary Mid Cantabrian, Ricky May who last year was on the stage as a Lifetime Legacy winner, but also Sarah O’Reilly, who last year won New Zealand Rural Sportswoman of the Year.

Morrison was initially nominated thanks to his outstanding achievements in the sulky as the winner of the last two New Zealand Junior Drivers’ Premierships.

He also broke new ground last year when he drove in the New Zealand Trotting Cup for the first time on board Di Caprio, who finished fifth.

A talented horseman with a bright future both as a trainer and a driver, Morrison’s citation suggested he is in for a long and fruitful career in the harness racing industry, and could end up as a high-achiever.

While news of becoming a finalist was welcomed by the youngster, it’s business as usual ahead for Morrison, with a busy three days in the sulky.

He’s in action at Addington on Friday night, and will then be at Rangiora on Saturday before making his way to Winton for the race meeting down there on Sunday.

Tonight, Morrison lines up one of his own stable runners, Boudica late in the programme.

The three-year-old filly has shown a modicum of ability in her early career, and with a good run from the inside draw, she should give a good account of herself.

He also slips into the silks of his father, Chris Morrison early in the night on in-form trotter, Random Jude.

Three drives tomorrow at Rangiora are then complemented by an excellent book at Winton on Sunday, where all five drives look big winning chances.

With 33 wins on the board, Morrison is just two wins shy of where he ended up last season as he shoots for three consecutive junior drivers’ premierships.

And it would come as a major surprise if he didn’t add to the tally over the weekend. 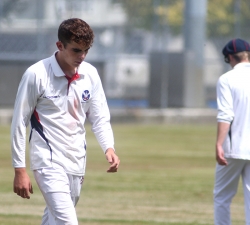 Devon Flannery Ashburton College 1st XI . Photo Jaime Pitt-MacKayAshColl’s 1st XI has an uphill battle ahead if it wants to avoid an outright innings defeat in its two-day game with St Bede’s College, which finishes tomorrow.

The Christchurch school is well on top after Saturday’s first day at the Ashburton Domain, where the hosts were asked to follow on.

Bede’s made 218 after winning the toss and electing to bat, with Lachlan Busch top scoring with 61.

Devon Flannery (above) impressed with the ball, taking 4-31.

In reply, AshColl were routed for 64 with Millar Newlands top scoring with 22 not out, batting at 10.

Another 132 runs are required just to make the St Bede’s boys bat again.

The new committee ranges in age from 11 to 23 and will drive youth council activities, help organise events, liaise with Ashburton District Council and address issues facing young people in the district.

They have a wide range of interests that include drama, sailing, dance, softball, karate, volleyball and chess.

The group’s chairman is 20-year-old Michael Baker, who works for Des Kruger Tree Services. He is supported by Ashburton College Year 11 students Henry Goodes and Lara Shierlaw, who are co-deputies and have respective event and community liaison duties as well.

Former Borough School student Maddie Page, now in her first year at Ashburton College, has taken on the secretary role, and 20-year-old Beatrice Bernarte, who works at Rosebank Resthome, is global ambassador.

Other members include Mt Hutt College’s Abbie Wilson-James, who is submissions co-ordinator, and John Magyaya from Ashburton College, who is in charge of online media and is assisted by Alex Cojocary, the youngest member on the council.

The youth council will meet on the first Wednesday of each month and two district councillors, Cr Diane Rawlinson and Cr Lynette Lovett, will support them.