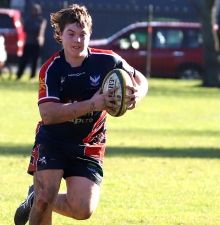 Josh Dunlea in action for the Combined side. Photo supplied.The table may say one win apiece, however there are contrasting tribulations this year for Timaru Boys’ High School and Mid Canterbury Combined.

The two sides meet in the UC Championship today, and while the South Cantabrians should be firm favourites at home, the mental toll on the side following a series of tough defeats against the big Christchurch schools could be a factor.

Mid Canterbury Combined however is a young team full of enterprise, despite being smacked around for the majority of the season.

They did notch a gutsy competition win a fortnight ago against fellow strugglers Roncalli-Aoraki Combined, however they were brought crashing back down to earth last weekend against St Thomas’.

They have endured a series of tough defeats to the competition big guns.

Whether Mid Canterbury can compete up front today remains the big question, however they have proven it has the talent out wide when moving forward with Charlie Brown, Thomas Paterson and Sam Ree.

The critical period for the team will be after halftime, which will be dependent on the nature of the scoreboard and how much tackling it has been forced to do in the first spell.

If they can hang in the fight, then maybe the pressure goes back on Timaru Boys.

Positives in defeat for AshColl 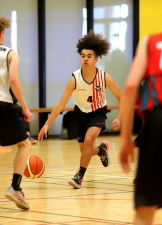 Thomas Patterson put in a solid shift for the Ashburton College side on Tuesday night. Photo supplied.Another loss might not look good on paper, but there’s plenty of pleasing progress for Ashburton College Boys’ basketball coach, Brian Kerr who knows his young charges are headed in the right direction.

On Tuesday night, the team took on Middleton Grange up in Christchurch and despite putting together a good performance on the court, they were unable to walk away with victory, losing the match 103-84.

Both sides took their time to work into the match, but it was Middleton Grange who drove harder and walked off the court and the end of the first quarter with a 25-21 lead.

If they were strong in the first, the hosts were even better in the second though as they really stepped up their workload and found gaps in the College defence to lead comfortably at 56-35 at the end of the first half.

A refocus and strong direction from Kerr at the half-time break saw an almost new-look College side jump on the court for the second half and they tightened their defence and got things back on track offensively.

A strong finish at the end of the third quarter saw the lead clawed back to 78-64 and the match was ripe for the picking for either side.

The previous week, College had really come into their own in the final quarter and for the first stages it looked like it was on the cards again with a 7-0 run.

A time out by the hosts changed the game though, stemming the College offensive flow and forcing some easy turnovers they took control again and rounded out the match impressively.

While beaten, College were far from disgraced.

Kambell Stills continued his great form, picking up 19 points with some impressive dunks thrown in for good measure. James Reid was tidy with his 15 points.

As he has been all season Riley Sa was again right in the thick of it with 15 points of his own.

Kalen Tait produced probably his best performance of the season and drove hard to the basket and was dangerous on the fast break and Thomas Patterson turned in another good shift for 13 points.

Kerr said the College side were well aware of the Middleton Grange full court defensive options and worked hard to mitigate it.

For most part they handled it well,” Kerr said.

“Unfortunately it was their own defence that was ultimately the problem.

“They had a bad second quarter where their defence went flat which also impacted on their offence.

“Because of that, Gators offence found gaps and outscored College 31-14.”

Kerr added that he was proud of the fight his side showed and that when they maintained their composure they were definitely a match for Middleton Grange.

College down Celtic in a thriller

A tenacious all-round display by College A has led them to a 34-32 win over Celtic A in a thriller between the two rivals.

The first game of ACL premier netball’s championship round on Thursday went down to the wire, however it was College who kept their nerve in a nailbiting final quarter.

It was hard-fought in the later games too, with United holding off a fast-finishing Celtic B side who proved their worth after being promoted to premier 1 earlier in the week.

Hampstead were also made to fight tooth and nail against a fired up Methven side, as the form team of the competition escaped with a 45-41 win.

A gripping night of netball was set up in the first matchup on court.

College were always going to match Celtic for energy, however they brought a noticeable physicality to the equation on defence.

The side edged ahead in the first quarter off the back of Hayley Tallentire and Sophie Adams in front of goal.

Down 11-7 at the first break, Celtic began to dictate the exchanges in the second period and got the ledger back to one by halftime.

It was a bruising third quarter, with both teams staunching it out on defence.

College were disciplined in centre court as they patiently worked the ball into position, meaning Celtic were left with scraps to feed off.

Although they were unsettled into mistakes, Celtic remained in touch via their clinical attacking and mid-courters.

Poppy Kilworth however was a ball of fire in the defensive third for College, throwing herself around to thwart any hint of scoring momentum for Celtic.

College held a 28-24 lead heading into the final period and appeared slightly nervy after the resumption.

Celtic capitalised on a few unforced errors from College, outscoring their opponents six goals to two early in the final stanza.

The green machine squared things up twice during the final few minutes.

However the ice-cool Tallentire landed the pivotal final points as the lead for Celtic continued to elude them at the death.

Later in the evening, Methven provided Hampstead with their toughest game all year as an upset looked on the cards deep into the encounter.

It was tit-for-tat early with both sides making few mistakes.

Methven however brought a physical presence as they looked to get on top of the competition frontrunners.

Even the competition’s leading shooter Alice Eddington was unsettled into the anomaly of consecutive misses on goal in the first quarter as Methven secured a deserved lead.

Hampstead found their groove to wrestle back the lead early in the second period.

However Methven were not going away, and picked up several turnovers to reclaim the ascendancy at halftime, up 23-20.

A vulnerable Hampstead were being overawed physically as they lost midcourter Ashleigh Collier to an injury.

It looked like goal attack Nicole Hands was going to join her on the side early in the third following strong contact, however the shooter soldiered on.

Methven were proving tough to break down at the back, with Sarah McKenzie scrapping for any bit of possession.

Hampstead worked the corners and remained in touch with only a goal separating the two sides at the final interval.

The lead changed hands early in the final quarter as Methven goal shoot Kelera Nawai crucially was off target as the pressure went on.

A strong finish ensured from the blue and golds to deny the out-of-towners by four goals.

United claimed a 33-27 win against premier 1 newbies Celtic B to go to the top of the championship round.