Past AshColl pupil Susie Nordqvist. Photo supplied.Susie Nordqvist is to join TVNZ 2 as the host of A Current Affair. Launching on Sunday 31 January, A Current Affair will bring viewers the latest in local and international consumer affairs, entertainment and real-life stories for everyday New Zealanders.

With almost 20 years’ experience as a journalist, Susie has a wealth of experience in newspapers, online and broadcasting, most recently presenting and producing for Newshub Live at 4.30pm.

Susie is looking forward to hosting a brand-new entertainment show in 2021. “I’m thrilled to be starting the New Year with a new show on TVNZ 2.

“Current affairs has been a part of my life for as long as I can remember, and I can’t wait to begin this new chapter with A Current Affair. I’m looking forward to sharing the show with New Zealand audiences.”

Viewers will get a double dose of Breakfast’s Matty McLean who also joins A Current Affair as the show’s local reporter. Matty will do what he does best – chatting! He’ll be on-hand to speak to the nation’s favourite entertainment stars, and get all the goss on their lives and latest projects.

Matty says, “I’m nosy by nature, which is possibly how I ended up on this career path!

“So the chance to get the scoop from some truly fascinating people is really exciting. I’m betting some of these interviews will spark some amazing water cooler conversations afterwards!”

In the show’s premiere episode, Matty sits down for a one on one interview with TVNZ’s new bachelorette Lexie Brown, to find out what she’s really looking for in love.

Were you there at the start? 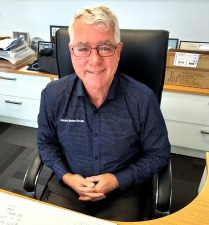 Peter Gluyas of the Ashburton College Alumni. Photo supplied.There’s something special about the first 10 years.

Peter Gluyas believes so and is chairperson of an alumni committee that’s organising a reunion of students, teachers and staff who attended Ashburton College in the first 10 years of its life.

Gluyas and his committee met this week with the major task of informing as many former students as possible and inviting them to the reunion. One thing’s for certain they’ll all be over 60 and may have some discretionary time to attend the function.

However, finding them is not all plain sailing as American Magic found out. Records of who attended Ashburton College during those years are difficult to find, so Gluyas is “spreading the word”.

“By announcing and publicising the reunion, we’re hoping former students will respond or people will contact us with names of those who could be interested.

“We know the head boys and girls of Ashburton College during those years, but after that we’re relying on our own contacts and community input.”

While a reunion is essentially for former students to come together and reconnect, Gluyas has a further purpose.

“Our intention is to foster closer relations between school, community and business, with the aim of providing ongoing support for Ashburton College,” Gluyas said.

“We realised that building a network of former students needed to be structured so we established the alumni two years ago and have been working towards the reunion ever since.”

It hasn’t been easy because, for the first six years, Ashburton College was located on two sites.

The college was an amalgamation of Ashburton High and Hakatere College and remained on existing sites until the new school was built and opened in 1971.

Gluyas is planning an informal gathering down-town on Friday night, May 7, with a tour of Ashburton College the following day.

Former pupils will watch a first 15 rugby game and inspect plans and a model of the new school which will be built on the existing Walnut Avenue location.

On the Saturday night, there’ll be an official reunion dinner with speeches, toasts and entertainment provided by school musicians and vocalists.

Gluyas is hoping to attract up to 200 former students and appeals to them to contact committee member, Shirley Falloon. 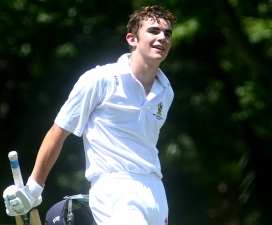 Devon Flannery celebrates his century milestone against South Canterbury on Saturday. Photo Jaime Pitt-MacKayIt was a simple game plan for Mid Canterbury batsman Devon Flannery when he came to the crease last weekend.

Get in, bat the whole day.

He did get in.

The clearness in thinking was something which evidently paid off for the Ashburton teen, as he delivered the biggest and most decisive knock of his young representative reign.

His team needed it also.

After he was dragged out into the middle in just the second over of the innings already one down, Mid Canterbury found themselves in early strife at 12/3.

“I was losing a lot of people around me,” he said.

“But James (Southby) was a good help, when I was with him it felt pretty comfortable.”

The pair put on a crucial fourth wicket stand of 80 to haul Mid Canterbury off the ropes as they registered 226, which ultimately was enough for the team to claim a total of 8 first innings points in the drawn match.

But it was Flannery’s combative stay at the crease which was the turning point as the South Canterbury bowlers felt the pinch.

“They were getting a bit frustrated, especially when it was me and James, they kept pretty quiet and were bowling a few more bad balls.

He timed the ball to perfection and proved devastating down the ground when the opposition bowlers were guilty of over-pitching around off stump.

Apart from some gentle ribbing from the South Canterbury side around the looming milestone, Flannery had no clue of his score until his team-mates and a sprinkling of patrons at the Ashburton Oval broke out into applause.

Flannery brought his maiden Cup century up with a textbook straight hit towards long off.

“It was a bloody good feeling, but I just needed to get the helmet on and keep going because we needed a lot more runs.”

His contribution continues a run of the younger players of Mid Canterbury going big for the team.

Team-mate Angus Jemmett was also 16 when he hit 108 on debut in the Hawke Cup a year ago.

“We’ve played a lot together and we both enjoy it.”

Flannery also credited the track at Ashburton Oval last weekend as a great cricket wicket, and one of the better surfaces the ground had produced.

“It was coming on nice.”

He also noticed there were less nerves heading into his fifth Hawke Cup game after being backed by coaching staff over the past few weeks to play his natural game.

“I knew I was hitting the ball well at practice.”

With such an important match against North Otago, you would be forgiven for thinking the team may be feeling the edge as they look to maintain top billing in Zone 4 and keep alive their chances at a challenge against the Cup holders.

Flannery, who is feeling more and more comfortable in the senior team, will again have a role to play in Oamaru this weekend.

“Ever since I started, all we’ve talked about is trying to get that Hawke Cup challenge.

“Everyone’s pretty pumped up to get a good outright win hopefully.

Mid Canterbury are all square on 16 points in the zone alongside Southland and Otago Country.

There will be added interest in how Country fares against South Canterbury in Alexandra which also starts today.