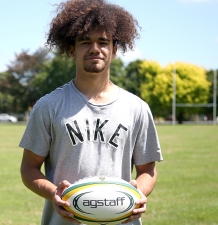 In what is set to be a full year for the Mid Canterbury 17-year-old, preparation for 2021 was already kicking off before the previous year was out.

The groundwork for the Mid Canterbury Combined’s 1st XV began in earnest before Christmas when coach Shane Enright thrust them into a bronco challenge.

“It was a bit of a wake-up call,” Patterson said.

He does however have a fair idea of the demands required to be competitive after a challenging UC Championship 2020 campaign where the side finished second from bottom.

“Some of the results were a bit disappointing,” he said.

“But we did get to play some good rugby and it was just fun to be able to play.”

“We were a bit inconsistent at times because we had shown potential.”

Patterson however was a composed presence in the pocket, despite the continual hurdles the side faced, which included what was a brutal injury toll.

“We weren’t the biggest team.

“It was pretty tough. And a lot of the schools that did come out had the expectation that they were going to win convincingly so we just played our rugby.

“We had a connection within the group where we all got on really well, which made it much more fun.”

He admits steering a team around while consistently under pressure was a rewarding challenge, and credited the players outside him as invaluable.

This coming-of-age experience for both he and the squad may prove significant with several of the group set to return for their senior year – Patterson included.

“If we can get a few wins under our belt (in 2021) because we lost a couple that we should’ve won.

“Like the game against Lincoln last year, so just taking our opportunities.

“It’ll be good if we can get out of that bottom bracket of the table.”

From a personal point of view, a crack at making the Crusader Knights development camp remained an ambition.

“That would be pretty cool.”

Aside from being part of an off-the-field leadership circle for the Combined squad last year, he takes on a role of great significance as head boy for 2021 at Ashburton College.

Following on from last year’s school student leaders who also navigated Covid, tackling numerous responsibilities was a challenge he was up for, he said.

“We have a good team this year and they’re all switched on.

“We had a meeting which definitely makes it a lot easier for me.”

Patterson has also been part of the school’s basketball setup for the past few years and has a desire to finish what he started.

“I’ve been contemplating it,” he said.

“I’ve played for the last four years so I think I’ll finish in my final year.”

“I really enjoy it, it allows me to express myself a little bit more without worrying about getting crunched.”

While rugby remained a massive driving force at present alongside his senior school year, Patterson said he was “keeping his options open” long tem.

“There’s a lot of things I can do, because obviously you can’t play sports forever.” 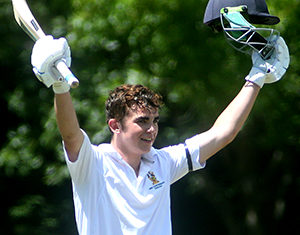 Devon Flannery with his masterful century. Photo supplied.Another dose of final session fireworks gave Mid Canterbury’s cricketers another sniff of an outright win in the Hawke Cup at the weekend.

The team were left to ruminate on several hypotheticals, as the clock snuffed out the prospect of maximum points as they came within two wickets of completing victory over South Canterbury at the Ashburton Oval.

With that said, Mid Canterbury should be more than satisfied as they walked away with the first innings points off the back of a blazing knock from 16-year-old Devon Flannery.

The AshColl pupil hit 134 – his maiden Cup hundred and the highest individual score in the zone this season – to guide Mid Canterbury to 226 on Saturday’s opening day.

The youngster was in commanding touch on the Saturday as he steered the hosts out of early danger before taking to the South Canterbury attack during a 232 minute stay at the crease, which included 14 fours and four sixes. To say his knock was critical to the Mid Canterbury cause is self-evident and provided his team-mates something to bowl at.

The visitors were resolute in response as they went to tea on the first day at 26/1 – their only setback coming when debutant Harry McMillan took a sharp chance at forward square leg off the bowling of Shaun Stagg.

Mid Canterbury, however, exerted control late in the final session to complete the day on top.

A double strike by James Southby had both batsmen back in the dugout before Angus Jemmett had Sam Porter trapped in front as the visitors limped to stumps at 96/5, still trailing by 130.

The prospects of a result appeared to take a blow the next day, as rain followed by a wet outfield meant play did not get under way until about noon.

Needing quick wickets, Mid Canterbury were able to strike twice in the 15 overs before lunch and again with Jemmett’s first over after the break, to leave South Canterbury eight down and 100 still behind.

A 29-run ninth wicket stand – the visitors’ second highest of the innings – between Phil Lill and Mark Otley impeded the hosts slightly, but it was short-lived as the tail was mopped up.

Although in the driver’s seat with a 57-run first innings lead, Mid Canterbury curiously balanced dangling the carrot enough for South Canterbury but leaving themselves enough time to bowl them out.

Backing up his three-for with the ball, Jemmett led the way on second crack with 61 as the visitors made regular inroads to ensure the hosts did not dictate proceedings completely.

Captain William Southby pulled the pin at 125/6, which left South Canterbury a target of 183 at just under 8 an over, and 23 overs for Mid Canterbury to pull off an unlikely win.

South Canterbury were two down early before Sam Porter and captain Jacob Naylor upped the ante at close to a run-a-ball.

Another two quick wickets left South Canterbury at 65/4, however their skipper continued to play positively as Mid Canterbury sent fielders to the boundary rope.

When Naylor and Shaun Rooney were dismissed in consecutive overs to leave the visitors six down, plans to charge the total were aborted as the hosts circled – not unlike what occurred against Otago Country before Christmas.

Two wickets in the final over from Tom Middleton came in vain for Mid Canterbury as play was called off moments later.

The 24th and final over of the match appeared to be brought into question with Mid Canterbury Cricket admitting that due to a “rule misinterpretation”, play should have been pulled an over earlier.

Mid Canterbury is now in a three-way share of the lead of Zone 4 alongside Otago Country and Southland ahead of its final match against North Otago in Oamaru this weekend.

Ashburton dominates on the greens 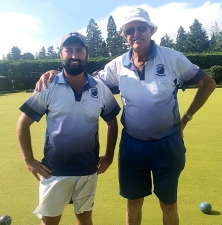 Brentton Donaldson and John Kewish. Photo supplied.The Ashburton Bowling Club can boast having some of the best singles players in town after a winning double in the Lowry Cup and Nan Marsh Singles on the weekend.

Brentton Donaldson claimed his second Lowry Cup title in stifling conditions in Methven, while Wendy Suttie swept all before her to win the Nan Marsh at Allenton.

After a huge day of qualifying seven days earlier, both fields were worked down to the knockout stages, and five ladies made it through to the big dance in the Nan Marsh on the Allenton green.

In an all-Ashburton match to open the day Barbara Skilling and Wendy Herriott did battle in the first round, with Skilling proving too strong for her club-mate, winning 21-15.

That pushed the competition into its semi-final stage and Skilling squared off with Suttie while Hampstead’s Jo Collis and Ashburton’s Alison Gibbs battled it out in the other.

Suttie and Skilling put together an impressive performance with the match finishing at 22-19 in a closely fought affair, while Collis booked herself a trip to the final with a win over Gibbs 21-9.

In the final Suttie kicked into gear strong from the outset and built a steady lead, and eventually worked her way to the required 21 shots to win the title, 21-11.

Up in Methven, 11 hopefuls started the day chasing glory, but the field was slowly whittled down to just Donaldson and clubmate, John Kewish to battle out the first-to-21 shots final in front of a decent sized crowd.

The first round of the morning resulted in Allenton’s Mat Bassett winning a thriller over Methven’s Simon Fleetwood, while Allenton’s John Drayton did the same against Methven’s Rob Fensom. In the third match of the early morning – an all-Methven affair – Aaron Allred proved too strong for Matt Markham.

That left a field of eight remaining.

Donaldson began his quest with a 30-end marathon against Allenton bowler Alex Crawford, with neither player giving in an inch in one of the matches of the day, while Drayton comfortably held off Allred.

Kewish stepped into the fray with a good win against Bassett, and Richard Kane (Allenton) and Bruce Harper (Methven) fought out the other match with Kane claiming the spoils.

The semi-finals were both comfortable affairs for Donaldson and Kewish.

Donaldson was too good for Kane winning 21-13 while Kewish got the better of Drayton to win 21-8.

In the final, Donaldson made a strong start and raced out to a big lead against his club-mate and never really looked back, relying on his impressive draw game to constantly score shots as he built up his tally to win 21-7.

It was Donaldson’s second victory in the coveted singles event, having last won it in the 2017-2018 season.

Meanwhile, in Christchurch a number of local names featured in the hugely popular Stuart Buttar Invitational Pairs at the world-class Burnside Bowling Club.

The annual tournament features some of the biggest names in the sport and is always a must-compete for many every year.

None of the three combinations featuring Mid Canterbury players made it to the finals on Sunday – but all three did put up strong efforts in an incredibly tough line- up of players.

Allenton’s Sandra Keith and Pete Whinham lost their first three games in the opening stages of the competition, but bounced back with two strong wins in the final two rounds. That pushed them into Division 3 where they picked up a win from the three matches but missed the finals.

Up in Division Two, the Methven pairing of Craig Carter and Tim White also picked up two wins in qualifying and put themselves in with a shot at the finals but fell at the final hurdle, losing their third match in post section.

They had a draw and a win from their three post section matches, but were unable to advance through to the next stage.

The tournament was won by Matt Gallop and Isaac Denny who fended off the challenge of the internationally acclaimed Jo Edwards and Val Smith to win the final 10-8.