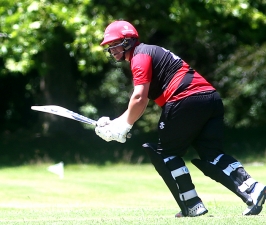 Angus Jemmett (above) scored 32 for Tech Stags on Saturday against Star at the Ashburton Domain Oval. Photo Adam BurnsA couple of individual cameos have guided  the Tech Stags home to ensure a winning start to the year, romping to an 83-run win over Star.

Tech had struggled after being sent in to bat by the Timaru club, with a couple of young recruits propping up the Stags’ batting effort.

Devon Flannery (67) and Angus Jemmett (32) were the only batsmen to get starts, while Des Kruger (11) was the only other individual to cross double digits as Tech were restricted to 151.

Openers Jason Morrison and Bevan Richan were ejected in consecutive overs to leave the Mid Canterbury club at 8/2.

It brought the in-form Kruger to the crease who briefly secured proceedings before he too was removed in the 14th over.

At 29/3, it was left to Flannery and Jemmett to get things back on track for the hosts, as the duo put on 49 for the fourth wicket over the next eight overs.

Brad Leonard rattled Jemmett’s stumps in the 22nd over however Flannery kept the scoreboard ticking over.

Despite a timely half century from the youngster, he was bereft of support at the other end as the Stags lost their final five wickets for 27 runs, to be all out in the 43rd over.

Star were restrained by some tight bowling in response, with Alex Hooper and Ryan Bell proving difficult to get away.

Openers Phil McGregor and Daniel Campbell were back in the hunt inside the first 10 overs.

The introduction of Jones into the attack cause issues for the top and middle order of the Star line-up.

He removed Chris Hogan to leave Star three down before claiming the quick scalps of Adam Fahey and Tyler Cox before the 15th over to leave the club’s chase in tatters.

The next two overs saw the visitors unravel further with a run out and another wicket for Jones, when he had Brad Leonard caught and bowled to leave Star at 45/7.

Some minor resistance from Hitesh Valand (17) alleviated some of the chagrin, however it was nowhere near enough as Star were dismissed in the 25th over.

Jones (4-15) and Hooper (3-9) completed sterling shifts with the ball, giving nothing away to the opposition batsmen.