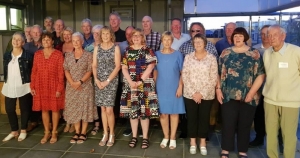 “The brainy class”  as someone referred to them recently or the 3L AshColl intake of 1970 had a class reunion earlier this year.  I contacted four class members to delve into their memories of College were with 50 years hindsight. They all struck me as being particularly down-to-earth and refreshingly frank about their time there.

Jane Hurley (nee McCloy) who lives in Ashburton organised the get-together but was quick to point out that many of her former classmates were very helpful in tracking people down.

Jane describes the reunion as “fabulous” and that 23 of the original 31 pupils attended the weekend’s events.  Three came from Australia and for most it was the first time they had seen each other for 47 years.  Just five are currently living in Mid Canterbury.   Sadly, three have passed away and there were just two past pupils who they could not track down.

Jane described the top band class as “naughty at times”! Latin was a subject they “endured”  and their form teacher was Cliff Bezar, a hard taskmaster and Principal Owen McDowell guided 1,600 pupils back in the day.

Peter Weir  is now living in Christchurch and currently heading the environmental planning and performance team in a large forestry company.  In Peter’s words “he’s a RMA bush lawyer” and has been appointed to quite a few Ministerial advisory committees and reference groups over 10 years including Climate Change and NZ emissions trading scheme settings and most recently to the Freshwater Leadership group.  Peter has just stood down from the Council of the NZ Forest Owners Association, a national advocacy organisation after about 12 years on board and the last two as President.

He had two four year stints in British Columbia, Canada working as an analyst for the BC highways snow avalanche programme and then a few years later working as forest hydrologist and geotech consultant.

Best memories of Peter’s  AshColl years were  “the raucous behaviour of at least half the boys in Miss Quill’s French class and boiling mercury and burning lithium ribbon in the science labs when Peter Bain or George Downwood weren’t looking!”

Another well known teacher was the cause of Peter’s worst College experiences!  Peter lived in fear of “being caned by a certain Scotsman for more raucous behaviour”. Sadly Alec Thomson passed away recently so he cannot refute this but when I interviewed Alec in December 2018, his droll response to being accused of free use of the cane was “those tales are much exaggerated”. Peter blames the late Jim Upton “for most of the raucousness”. Peter and fellow conspirator Brian McGuigan “very sadly had to farewell Jim in Nelson a year ago where Jim had established an international language school and so he is unable to refute this accusation”.

Peter recalled a most amusing event when they arrived at the brand new school on Walnut Avenue to find that “quite a few of our classmates were implicated in tyre skids appearing from someone in a mini doing donuts on the checkerboard assembly area (only one person in our class owned a mini and it wasn’t one of the girls)”.  An interrogation ensued by Principal Owen McDowell followed but “no-one ‘let on’, not even Owen’s ‘hard-shot’ daughter Helen who was also a member of 3L and who might just have been implicated”.  Helen attended the reunion too and I am sure the incident would have been raised.  I wonder if further light might have been shed?

Peter’s ‘favourite teacher award’ went to Mike Edsall for bringing history to life.  “Animated” was how Peter described Mr Edsall’s teaching style when Mike apparently “once pulled out his military issue pistol and fired a blank during class (not 3L) while describing the assassination of Archduke Franz Ferninand of Austria”.  Peter can neither “confirm nor deny” this claim!

Julie Wilson is now part owner of an advertising agency in Christchurch and responsible for the creative side of the business.  She remembers being a first day pupil in a brand new school as “pretty amazing” though the novelty wore off “quite quickly”.

The worst of Julie’s College memories there were the “general angst and heartache that is part and parcel of being a teenager”.

Julie remembers with amusement the time she once suggested a group of architectural students she had met might like to “come and see our brand new school.  They turned up one lunchtime and, given they all looked like hippies, were not at all well-received by the Deputy Principal”.  Julie still remembers the look of horror on his face thinking that they might be going to stage a “love-in”!

Pamela Edsall (wife of the aforementioned Mike) gets the nod as Julie’s favourite teacher.  Mrs Edsall taught 3L English and she had Julie direct a class play which proved very helpful in later years when Julie did some producing and directing as part of her job. Julie stresses “they were only TV ads, not quite Lord of the Rings”, but she was very grateful for the encouragement.

Another of Julie’s favourites was their 6th form art teacher and while Julie can’t remember his name, she does remember having a crush on him, along with most of the girls in that year group.

He remembers a variety of locations for his College years: the old High School site before the brand new Walnut Avenue site.  Grant found this “a bit isolating”.  His main recollections of that time were “thinking up excuses for not having done homework”.  At that time there was pressure to have the boys cut their hair tidily and the principal suggested “if we didn’t cut our hair, we would have to tie it up”.  This didn’t go to plan at all with the entire group of boys involved tying their hair into pony tails or pigtails!

Grant remembers with awe their history teacher, Mr Edmonds, alternating between two roles in some historical drama, while leaping on and off the desk.  “Quite an impressive performance and commitment to teaching” Grant recalls.  He also enjoyed Peter Bain’s science classes and Grant and the rest of the  attendees really enjoyed catching up with Peter at the reunion.  Grant wishes he had “put more effort into French which would have been quite useful in later years”.  Don’t we all Grant!!

After his College years Grant did a Technical Institute’s electronics course in Christchurch and lived there for five years before seven years in Napier.  Twenty-four years based in the UK followed before settling in Patumahoe (south of Auckland).  Living in the UK allowed Grant wonderful travel opportunities in different parts of UK and Europe. He now describes himself as “accidentally retired”.

While some 3Lers are approaching possible retirement age, their careers continue to be extraordinarily varied – nursing, teaching, farming and management, to name a few.  They are all looking forward to their next reunion in 2025. 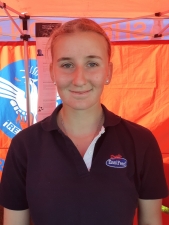 What impressed me SO much about this young woman was her quiet confidence and resolve.  Brittany attended College 2015-2019.

On the day of the Show Brittany was heavily involved in equestrian events but had the time to look over the photo boards and displays for both Alumni and College.

Brittany had very fond reflections of her College years and mentioned Mr Millichamp as her favourite teacher as he "was always generous with his time and taught with a sense of humour".

Brittany began studying towards a Bachelor of Agricultural Science this year just up the road at Lincoln College. 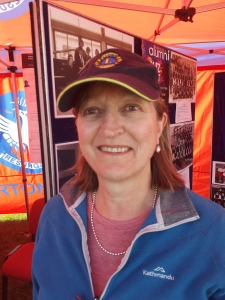 Being a first-day pupil at the College in 1970 saw Lois as roll monitor which, although that roll was no problem, it was finding her way around the "huge college" to the office that she found "petrifying".  Nevertheless she has happy memories of her years there.

Lois attended college until 1974 and was a keen member of Red House, particularly enjoying netball.

Typing was one of Lois' subjects and in those days students had to wear stiff, starchy fabric 'bibs' to ensure no peeking at the keys, ensuring the all-girl class became competent touch typists!