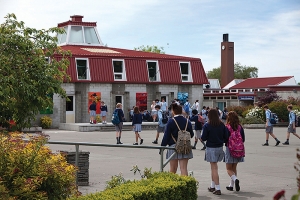 Over the next nine years, school rolls around the Ashburton District are expected to grow significantly, Ministry of Education estimates show.

By 2022 the ministry believes an extra 210 secondary-aged students will need to be accommodated and that at primary level an extra 75 places will need to be found, with 50 extra places needed at intermediate level.

Looking out to 2030, the ministry anticipates the district’s primary and intermediate school populations could grow by up to 460 with indications secondary rolls will peak in 2028 with up to 500 extra students and from that point will grow at a slower rate.

In its planning documents the ministry said that residential growth in Ashburton’s north was putting pressure on existing primary schools in the area and its master plan to ensure that growth was well managed came with the implementation of enrolment zones.

These are in place for a number of schools and after a long process, Ashburton College’s zone has now been signed off.

While the zone boundaries were close to what the school had requested, Principal Ross Preece said there was the odd anomaly particularly when it came to matching transport entitlement to zone boundary.

The college zone, effective from January 1, runs from the Rangitata to the Rakaia rivers and butts against the Mount Hutt College zone to the west, but there are two areas where the rules are less clear, Preece said.

Between the Rangitata and Hinds rivers there is an ‘open’ zone where students can choose to attend either Geraldine High School or Ashburton College, but there is a transport entitlement dead zone close to the Rangitata River that meant students would have to have private transport to a connection point with the school of their choice.

The Rakaia area has always been a grey zone for both Mount Hutt and Ashburton colleges, and this continues in the new zone boundaries.

Unlike the Rangitata open zone, however, school bus transport is available to both schools with the ministry saying this has been done to allow families choice.

And while zones are designed to give schools some certainty around student numbers, these were always difficult to establish until two or three weeks into the new term – after timetabling had been completed, he said.

The ministry has estimated the college will have 279 Year 9s in 2021, but 280 were already enrolled and the unknown was the number of walk-ups from families moving into the area.

Numbers also fluctuated with Year 12 students who may have indicated they intended to leave school, but decided over the summer to return.

And on the flip-side, there were others who found jobs over the summer, Preece said.

“It takes a couple of weeks to sort out, but I know our roll will be well over 1200 next year.”

Going into the new year, the college would be well staffed, but there were still vacancies for a head of department for science and a leadership role in the English department, but short term contingencies were in place to fill those gaps, he said. 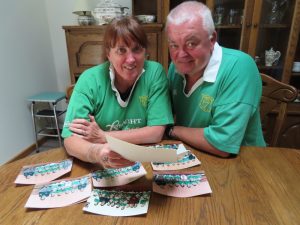 Darion and Kieron Gray have been going through old photos ahead of Celtic rugby's 100-year celebration over Easter 2021. Photo supplied.Rugby memories of sporting courage and famous road trips will be at the fore when the Celtic Rugby Football Club marks 100 years this coming Easter.

A weekend of celebration is planned, along with a centennial booklet and a special game of rugby.

Centennial committee chairman Kieron Gray said registrations were now open, via www.ashburtonceltic.co.nz and Celtic members past and present should save the date, April 2-4.

The green weekend begins with a catchup on the Friday night, and a senior game the next day. The team will be wearing their new commemorative strip, sponsored by Paul Summerfield Plumbing.

A dinner that night will be at the Ashburton racecourse, with speeches by former club captains and presidents; a band and dancing will follow.

A church service will be held on Sunday as well as a display of junior rugby skills and games, and barbecue.

Kieron said a special feature of the dinner night would be the auction of replica old-style playing jerseys commissioned by the club. Some player numbers might be hot property as they were one of a kind, like the No 10 worn by Jon Bond and Pete Blacklow, or the hooker’s jersey worn by Roger Gordon and Greg King.

‘‘The fellas who played in these numbers will want these jerseys.’’

Kieron said a large marque would be erected on one of the fields at the rugby club on Keenans Road and photos over the years would be on show.

The club has spent about $75,000 refurbishing its clubrooms ahead of the celebrations, fitting glazed windows, sliding doors, new carpets and curtains and energy-efficient lighting. The interior has been repainted.

A large proportion of the refurbishing funds are thanks to a grant from the Lion Foundation.

The club celebrated its 75th and then 90th birthdays to make sure rugby memories were not lost, and the new booklet being researched and edited by Steve Devereux will cover material from the past 25 years.

Kieron said standout memories for him over recent years included the opening of the club’s new Murney grandstand and winning the Watters Cup in 2018. The club also became the first Ashburton club to field a women’s rugby team.

He said there were some great stories of old circulating ahead of the centenary, including an account of an Easter tournament in Invercargill, written by Flint Hill, a member of the Celtic team that attended it.

‘‘He wrote a story about the bus trip to Invercargill. They stayed in a dry area and had to go to the next town to buy crates of beer. They stayed in a convent and were apparently practising their scrums against the bedheads at 2am.’’

Darion said the club was ‘‘a big green family’’ where people unselfishly gave time and energy. There were generations of players and supporters with the surnames O’Grady, Summerfield, Prendergast, Morrison and Hurley.

All the JAB teams will sport new jerseys for 2021 with crests marking the centenary; these have been sponsored by the Foodstuffs Charitable Trust and Ashburton New World. 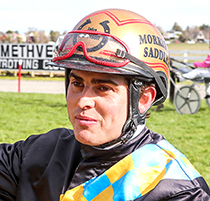 John Morrison. Photo supplied.Local horseman John Morrison will be out to follow in the footsteps of his Mid Canterbury colleagues, after he received a nomination for the Norwood New Zealand Rural Sports Awards this week.

The ceremony, which will be held at Awapuni in Palmerston North in March of next year, is a night singled in on the rural sector and Morrison – through his exceptional deeds in the sulky over the past 12 months has been nominated for Young Rural Sportsperson of the Year.

He is one of five nomination from the harness racing industry with Blair Orange, Natalie Rasmussen, Mark Purdon and Deneece and Murray Goldsworthy also receiving nominations.

At the award ceremony this year, Sarah O’Reilly and Ricky May both found themselves on stage as winners, with O’Reilly claiming the Young Rural Sportsperson of the Year award and May picking up the Lifetime Legacy title.

Morrison’s citation noted that he was the country’s top junior driver in the 2019-2020 season for the second year running.

After a neck-and-neck battle with closest rival Dylan Ferguson, he took out the 2020 premiership with 35 wins, to Ferguson’s 33.

Articulate and popular, Morrison has the potential to be one of the sport’s highest achievers.

He comes from well-established racing stock, with his family’s business being the Ashburton-based Morrisons Saddlery and Feed.

A cool head under pressure, Morrison is in demand, and just this year made his New Zealand Cup debut with Di Caprio, which finished fifth in the great race.

He has been race-day driving since 2016.

He also won the junior premiership in 2019 season.

Also making his mark as a trainer, Morrison is set to be a key part of New Zealand harness racing sport in the decades to come.

By mid December 2020 he had had eight training successes from 65 starters.