Babalot takes out a thriller

Babalot takes out a thriller 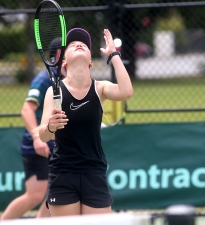 It was a close run thing for Holly-Jayne Feutz (above) and Team Yonex in their club tie with Team Babolat on Saturday. Photo Adam BurnsTeam Babolat can put their feet up over the Christmas break, having sewn up top spot in interclub tennis.

It was the barest of margins however, as the group claimed a one-match win over Yonex during the final club meet of the year on Saturday.

The side holds a five-point lead atop the open grade standings after claiming the vital two points in addition.

It was essentially a 2-1 win in the doubles which decided the outcome, before the two teams took three games apiece in the singles.

Brendon Adam and Phil Crozier prevailed in straight sets over Josh Jones and Holly-Jayne Feutz and Angela Ciora and Josh Leslie defeated Peter Conlan and Drew Gilbert to give Babolat the advantage.

In the singles, McCann, Watt and Conlan registered wins for Yonex, but it would not be enough as Babolat claimed three singles victories themselves following success on court for Adam, Crozier and Leslie.

The interclub frontrunners claimed a total of seven points, with Yonex claiming four for their four wins on court.

Team Wilson hit back from the disappointment of the previous week to sweep Team Head 6-0.

After suffering a walloping on court seven days prior, it was a faultless collective showing by Wilson, with Pete Leonard, Gareth Evans, Josh Gilbert and Ashton Cromie pulling off straight sets’ wins in the singles.

The result – and an eight competition point haul – were sealed with Leonard and Evans and Gilbert and Cromie winning their respective doubles encounters.