It was oh-so-close for Mid Canterbury in the Hawke Cup, however the side should be overjoyed to claim first innings points at the weekend.

The two-match encounter with Otago Country came alive late on the second day at the Ashburton Domain Oval. after the contest appeared to be trickling to a stalemate.

Otago Country entered the final hour on Sunday at 82/2 in their second innings, still another 115 runs off the target and a minimum of 16 overs left in the day’s play.

However Mid Canterbury whittled away to set themselves up at a late push at an outright win as the visitors lost 5-34 in the final session, slumping to 134/7 with five overs remaining.

Otago Country hung on as stumps were drawn and handshakes exchanged.

Unlike their earlier season meeting down in Central Otago, batting proved to be a more confronting prospect on both the Saturday and Sunday. 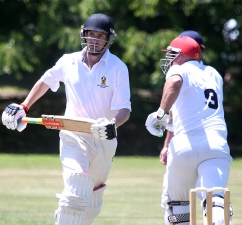 Mid Canterbury batsmen William Southby (left) and Des Kruger scamper through for a run at the Ashburton Domain Oval at the weekend. Photo Heather MackenzieMid Canterbury were bowled for 180 on the opening day, a positive outcome for Country considering the hosts won the toss and went to lunch break at 123/4.

Captain William Southby led from the front in tricky conditions with 61, while Des Kruger was inevitably among the runs with 46.

Otago also found the going tough on the Ashburton deck. After heading to tea at 40/3, the visitors were unable to kick on, as Shaun Stagg ripped Country apart to leave them 126/8 late on the Saturday.

A stubborn 31-run ninth wicket stand ensured a nervous sleep for Mid Canterbury, before Country were mopped up for 157 early the next morning.

Needing quick wickets, Otago Country picked up regular scalps at the top to keep the home side honest.

Again it was Kruger’s wicket which proved elusive for the visitors, as he fashioned a crucial knock of 66, which both inflated the second innings target and chewed into the remaining time left in the day.

Mid Canterbury were bowled out for 173 in their second innings, which left all three results still on the table, but the advantage very much with the home team.

A 72-run third wicket stand between Cameron Jackson and Steve Hobson looked to have ruled a line through Mid Canterbury’s chances of an outright win,but it was a premature forecast, as the final flurry of wickets set the hosts up for a remarkable victory.

A few more overs up their sleeve, and who knows what may have transpired. 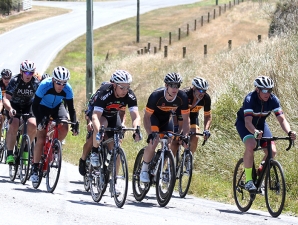 Photo Heather MackenzieSteve Hands topped off a stellar first half of the Tinwald Cycling Club’s season, scoring a victory in the Ashburton Club and MSA Super Liquor, Club Championships, contested over 64km around the Wakanui Beach block on Sunday.

The odds-on favourite made his decisive move on the final rise of the four-lap event, and soloed the last 4km to victory.

Hands, along with second place-getter Brad Hudson, third place-getter Larry Neal, and vet 3 men’s winner Tony Ward had earlier snuck to the front of the race on the first lap.

Kristine Marriott was in the thick of this bunch, producing her trademark tough ride, to lift the open women’s championship title.

Sam Cuttle continued his solid build-up for the Coast to Coast, lifting the under 19 title.

Liz Wylie was rewarded for a great ride lifting the vet 4 women’s title.

The juniors raced for club championship honours over 16km.

Mitch Brookland showed his dominance, securing an all-the-way victory in the under 17 grade, riding the course in 27.02.

Maddi Lowry ensured her last race in junior ranks would be a memorable one, claiming the under 17 girls’ title.

Zoe Spillane continues to impress, rounding out a good first half of the season with the under 15 championship ribbon.

Zac Brookland topped off a good day for the Brookland stable, taking the under 15 boys’ title.

Paul Brake took the bragging rights in division 2, getting up over his wife Monique in a tough sprint finish.

Merv Grewar finished the year off with the sealed handicap envelope.

The club will take a break over Christmas and kick the New Year off with a 36km handicap event around the Winchmore Church block on January 10, 2021.

Ashburton on the rebound 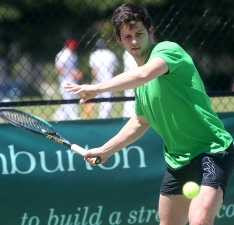 Country Ashburton were outclassed by premier tennis heavyweights Cashmere last weekend, and Jack Tiller and co need a response as pleasantries are resumed today at Elmwood.

The Mid Cantabrians have held on to third spot in the league, despite being swept 5-0 by a dominant Cashmere club in Ashburton on Saturday.

There is bound to be friendly fire again, with Tiller up against his old club.

Ashburton got the result back in round two four matches to two, however Elmwood will be thirsty for reprisals as they sit a solitary point behind Ashburton on the ladder.

The Merivale-based club were at their clinical best last week, dropping just the one set en route to a comprehensive team win over Shirley.

That may mean both teams head in to today with contrasting levels of confidence.

Country Ashburton hope this is not the case, as they look to get back on the horse in Christchurch today.

Back in Mid Canterbury and open grade and junior interclub returns to the court today for the final matchups of round two.