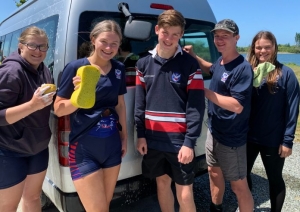 Brushing up on their car washing skills are rowers (from left) Isla Connelly-Whyte, Ruby Leverton, Riley Harris, Matthew Pearce and Claudia Thomas. Photo supplied.Ashburton College rowers will be washing cars and selling sausages this Saturday to raise funds to compete at the New Zealand Secondary Schools Rowing Regatta at Lake Karapiro in March.

The carwash runs from 10am until 4pm and will be held at the Pearson’s bus depot off West Street.

Signs will be out from the main road and rowers will be encouraging drivers to pull in for a wash.

Rowers will work in teams to wash and rinse cars, while others will be dispensing sausages that have generously been subsidised by Mike Hanson from Netherby Meats.

A car wash costs $10 and sausages are $2 each. Raffle tickets will also be sold on Saturday. 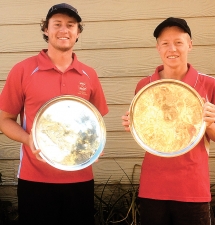 The pair won four of their five games, and had an impressive net hoops count of +59 en route to the title.

Logan also went on an unbeaten run to clinch the singles event which sees the local croquet ace in possession of both association and golf croquet South Island open titles.

Logan’s win in the singles came off the back of a five-from-five run in the round robin phase before knocking over Nelson’s Brian Winslang in the semi-final. He then accounted for Greg Bryant, of the West Coast, winning in straight games 26-10, 26-12. 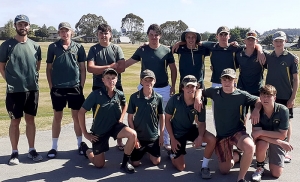 However, nagging drizzle throughout the day wiped out any prospect of play with Mid Canterbury gifted the silverware.

A superior run rate following a sharp week of cricket from Mid Canterbury proved to be the deciding factor.

Charles told the Guardian he could not recall when Mid Canterbury last won the long-standing regional tournament.

He reserved special praise for captain Angus Jemmett and Devon Flannery who were immense throughout the week.

Mid Canterbury had booked their spot in Thursday’s decider courtesy of an unbeaten run in two T20s and two 50-over encounters earlier in the week down in South Canterbury.

The side dispatched Buller by nine wickets on Tuesday to begin their 50-over campaign in emphatic fashion.

The side began their campaign on Monday with a T20 double-header, where it looked the goods.

Mid Canterbury edged Christchurch Metro Red by six runs in their first hit-out in the morning.

Later in the day, they hammered South Canterbury by 55 runs, after Flannery blasted a magnificent unbeaten 106 off 54 balls.

Flannery finished the week with a batting average of 230 across both formats, having only been dismissed once in three innings.

The next day as proceedings moved into the 50-over format, Buller were unable to bat out their overs as they were bowled out for 199 in the 46th over, having won the toss earlier in the day.

Mid Canterbury were effective with the ball and merciless in the field throughout, effecting three run-outs during the innings.

Wil Jemmett was the pick of bowlers with 2-27 with wickets shared evenly through the rest of the attack elsewhere.

Mid Canterbury made light work of the second innings chase as they chased down the target of 200 by the 36th over with just the one wicket lost.

Angus Jemmett was the ace in the hole for Mid Canterbury with an unbeaten 100, steering his side to the win alongside brother Lachie, who hit 49 not out.

George Robins made 43 at the top before falling in the 21st over – the only moment of cheer for Buller in the field.

Mid Canterbury backed up the next day with a seven-wicket win over Canterbury Country at Timaru Boys’ High School.

Another stifling effort in the field restricted the opposition to under 200, with Angus Jemmett, Devon Flannery and Toby Robinson starring with the ball, claiming two wickets apiece.

Set 177 to win, Mid Canterbury were again comfortable in pursuit of the prize, with Flannery completing a fine all round day at the office with a blazing 69 not out.

The Ashburton teen’s knock came off 41 balls, hitting four fours and five sixes in the process.

Mid Canterbury completed the task in the 34th over, with the loss of three wickets, to claim top spot.