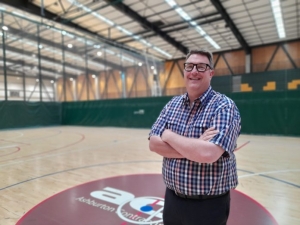 Mark Douglas is primed for a busy basketball season and he couldn't be happier. Photo supplied.Basketball fans who come along to watch Ashburton College senior teams’ home games this season will have a chance to win $100 if they sink a shot from half-way.

That’s one of the changes ushered in by the new president of Basketball Mid Canterbury and Ashcoll senior boys’ coach Mark “Roasty” Douglas.

He has long believed basketball is the best sport on the planet and he wants to share it with as many people as possible.

Roasty says it’s a sport that offers opportunities to players of all abilities, from those wanting to play for an American college to those wanting to play with their mates; and everyone gets to be part of a global basketball family. Even if you don’t think that Le Bron James is the greatest player of all time.

The sport is gearing up for another season and Roasty will be busy.

Ashburton College will be holding trials soon for its senior boys’ and girls’ teams and his son Brad will be hoping to retain his place in the side.

Roasty says it brings back great memories of his own playing days when his dad Gavin was a coach too.

“Some of my earliest memories are playing intermediate and miniball at the sports hall. I remember the old man coaching and managing the teams I got into over the years. They are some of my best memories, with blokes like Tim Kenny, Wayne Eddington, Rocket Rodgers and Regan Stills.”

Gavin was also president of the basketball association.

Roasty is looking forward to the season ahead, especially the Thompson Trophy and Whelan Trophy games for the Ashcoll sides.

This year will see new half-time entertainment for home games. Roasty’s jewellery shop Robilliards is putting $100 on the line for lucky punters who can nail a shot from half-way; one spectator will be pulled randomly from the crowd in the girls’ and then boys’ games to have a go.

The secondary school sides have been part of a big growth in numbers playing the game at Ashcoll. Last year nine sides took part in competitions from Timaru to Christchurch.

Pip Johnston will coach the girls’ side this year, while Summer Anderson will take the junior girls and Ben Ditmar the junior boys. Andrew Shepherd remains the teacher in charge of basketball at the school.

The senior boys’ side will be aiming for a spot in division one of the Thompson Trophy – the competition has doubled since it started and there are 24 teams this year, split into three divisions. They are a mixture of teams developing talent and teams recruiting talent.

The school sides will also be playing 3×3 basketball.

As president of Basketball Mid Canterbury, Roasty keeps an eye on growing the game outside the school too. Intermediate grade miniball gets under way on March 1, with games at Oxford Street and EA Networks Centre.

“Last year we had 24 teams in this competition but they missed playing because of covid. We are expecting big numbers because they’ll be keen to play.”

To co-incide with the start of this competition, BBMC is bringing down top national coach Lori McDaniel, Wildcats’ coach Mel Downer and top referee Rebecca Moon to run coaching sessions.

A mixed social grade is currently under way, with nine teams playing at Oxford Street, and the men’s senior competition will run again on a Wednesday night starting in April. 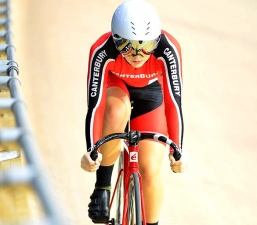 The Ashburton teen picked up two bronze medals at the

Her dual podium finishes were in the Women’s Sprints and the under-19 Women’s Points race, both held on the Saturday.

In a fortnight, Lowry returns to Invercargill for the Vantage Elite and U19 Track National Championships – the scene where she won her first national title early last year. 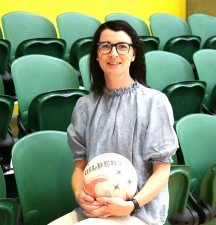 These are the driving forces for Ange Mitchell as she steps up to take over the reins of Mid Canterbury Netball.

Any doubts she may have had over her readiness for such a responsibility were outweighed by her passion for the sport and how her home region fostered it during the early years growing up in Mayfield.

“I loved my time playing in Ashburton and Mid Canterbury,” she said.

“This is where my passion for netball started.

“It’s really exciting to be able to give back to the place where you grew up and found the sport.”

With a comprehensive netballing background underlined by a 13-year elite level playing career, the 43-year-old appears to be the ideal candidate to step into the role.

Her love for the game guided her to the upper echelon as a five cap Silver Fern in the early 2000s.

“Looking back and seeing where I ended up, I would never have dreamed that.

“It’s pretty cool to think that someone from here can go on and follow their dreams.”

Further to her revered credentials as a player, Mitchell has had numerous coaching stints, mainly at secondary school level and is now a teacher at Ashburton College.

Although coaching at secondary school level was a natural fit for someone who was a school teacher by trade, there were more personal reasons as to why coaching at the level held appeal.

“I really enjoyed it (coaching),” she said.

“I coached at that level because that was where some of my best memories were from.

“At that time, playing for Ashburton College and Mid Canterbury and going to tournaments.”

Now the mother of two has gone full circle with local netball.

She first joined the Mid Canterbury Netball board in 2019, before being appointed president of the organisaton at the end of last year following the departure of Karla Newlands.

‘It’s a big responsibility and its a role that you don’t take on lightly,” she said.

“Karla had a chat to me about it.

“You can always look back and think I would’ve like some more experience before I took over but I’m someone who grabs opportunities that I think I could be good at, or I’m passionate about.

“This seems like a great way to give back to netball and our community.”

Although she admitted that Newlands was a “very hard act to follow”, the slightest apprehension swiftly evolved to excitement.

As far as her post-playing aspirations back in the day, game administration was not something which had piqued her interests.

Her four seasons with the Otago Rebels however introduced a new side to the sport which she had not previously encountered.

“Playing down there I became one of the ‘older’ players compared to Canterbury when I was quite young.

“I ended up captaining Otago, so I took on more of that leadership role and that space between the team and the coaches, managers, board, sponsors and administrators.

“Taking on those opportunities which allows you to grow and to see more sides of the game.”

She also worked as a netball development officer at Sport Otago, accentuating her broad knowledge base.

While Mitchell’s high performance insights were invaluable for Mid Canterbury Netball, it an ability to “connect people” following leadership roles and now as the Social Science Head of Faculty at AshColl which were equally significant, she believed.

“Community” has also been a term bandied around at the top office with Netball New Zealand eager to position netball within a community context as a key strategic focus.

“I think its continuing to grow and develop.”

“A lot of that driven by Netball New Zealand.

“But as a Mid Canterbury Netball team we really want to meet the needs of our community and continue to offer them different experiences in netball.