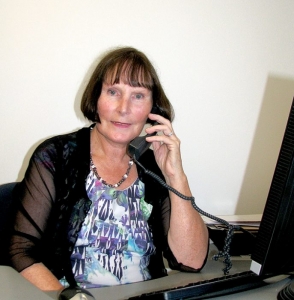 Jackie Girvan. Photo supplied.If there’s one lasting memory Jackie Girvan will take away from her 15 years as head of Ashburton’s Presbyterian Support it will be the unstinting generosity of people in the Ashburton District.

From the range of local funders that support the organisation in large amounts of cash to the individuals and small organisations who willingly give time, money and goods, without them Presbyterian Support would be a much less able organisation, Girvan said.

She joined the organisation in May 2003 after a career as a nurse and later as a health promoter.

Back then two support programmes were running and six staff were on the payroll.

Today there are 11 programmes and 20 full and part-time staff plus four contractors.

Looking back, Girvan says her health career was a perfect foundation on which to develop what was then a newly created manager’s role.

After 12 years as a health promoter she was looking for new challenges – she found these with Presbyterian Support, an organisation she says has grown strong on the back of on-going community support.

Large amounts of money is given locally by local funders such as the Trevor Wilson Trust, Mid South Canterbury Trust, Ashburton Trust, the Ashburton Benevolent Trust and the McKenzie Trust.

“Without them we wouldn’t have the services we do; all the money that’s given locally is spent locally, it can’t go elsewhere,” she said.

Local funding,  however, does not ensure nationally funded programmes are secure, but even with programmes changing most years, the organisation now sees more than 1000 clients a year.

“That’s a lot of people and when you consider the size of Ashburton, we have quite a reach.”

Inevitably people develop pet projects, and one of Girvan’s has been social housing.

Through a private investor that project has been partly achieved with a shared accommodation property for older people.

She hopes to add to this are over the next five months.

Inevitably there have been disappointments and frustrations, but they’re few.

“Probably the most disappointing thing is the people we’re unable to help and often they’re single men with mental health issues who are transient and the axing of the mentor programme.

“We struggled to get mentors but I’d love to see this here for 10  to 16-year-olds, there’s a real gap in our community but unfortunately we need funding,” she said.

That aside, what the organisation achieves every day of every year is pretty amazing, Girvan said.

“And that’s thanks to the generosity of this community, so many wonderful small things happen because of our networks, the networks we have in the community, with other agencies and with health agencies.

“And the staff, they’re the ones who do the work.”

This year had been tagged by Girvan for some time as the one when she’d step down, it was just which month. June, the end of the financial year seemed logical, she said, and decision made, she admits she’s now looking ahead to the first six months of retirement where she plans to do very little.

“I want to sit back for a while and see what happens. I will look forward to sleeping in because in this job you have to be flexible with your time, there’s always someone needing help.”

With just five months left, Girvan still has her wish list – a youth mentoring programme, more help for young families with parenting skills through visits from parenting professionals, supported accommodation for single men, more accommodation for the cash-strapped elderly and a couple of emergency family houses. 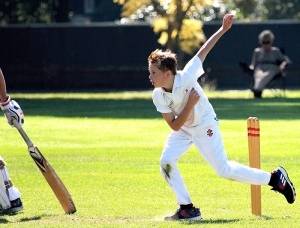 Ashburton College spinner Angus Jemmett sends another tricky delivery down the track to a St Andrew’s College batsman when their secondary school competition resumed on Saturday. Ashcoll holds a 40-run lead with a day to play, Jemmett helping a good first innings performance with figures of 2/10 off his 12-over spell. Photo Robyn HoodAshburton College first XI has a handy 40-run lead over St Andrew’s College 2nds after their two-day secondary school competition kicked off on Saturday.

College won the toss and elected to bowl first, easing the nerves of seven players on their debut.

The move paid off with James Forbes bowling one of STAC’s opening batsmen in just the third over.

Forbes and Jayden Fuller are the only Year 13s in a young side with plenty of talent and potential.

Year 9 Devon Flannery only starts classes today, but is already representing the school and standing out as a batsman.

The side also includes Mt Hutt College players Will Copeland and Chris Spittal.

Nerves easing as the players settled in, AshColl had STAC 60/5 at lunch and eventually all out for 96 in the 51st over.

Ben Middleton and Liam Sullivan claimed one each.

Ashcoll’s innings started with a hiccup when captain Tom Middleton was bowled, but a steady 44 from Isaac Bazley righted the ship.

Flannery 36 and Forbes 13 were at the crease when play ceased for the day with AshColl on 136; they will attempt to put on a few more runs when the game resumes next Saturday.

Watching from the sidelines was AshColl’s star bowler Harry McMillan, who travelled to the national under 17 cricket tournament in Auckland this month as part of the Canterbury line-up.

A back/shoulder muscle injury will keep him out of the game for a couple more weeks.

Their second division top tier opponents for the two-day format will include Shirley Boys (relegated with AshColl from division one at the end of last season), Christchurch Boys’ High School 3rds and colts, and Riccarton. 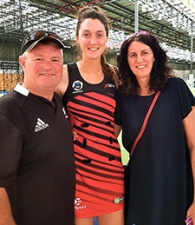 Kate Lloyd in her Tactix gear from last season, accompanied by her parents, Wayne and Sharon, Photo suppliedExcited Ashburton netballer Kate Lloyd is packing her bags for Hamilton this week for a season with the Western Bay of Plenty Magic.

Lloyd, 20, was named in the squad last August after returning from the Netball Youth World Cup in Botswana with the triumphant New Zealand Under 21 side.

Since then the 192cm defender has been finishing her studies and hitting the gym so she is ready for the tough season ahead.

Lloyd and her mum Sharon will be driving up on Thursday and Lloyd will live with three other Magic players for the duration of the ANZ Premiership season.

Last year she was part of the Mainland Tactix line-up, spreading her time between the top team and the Beko development league team.

Following the world cup, she concentrated on her studies at Lincoln University, where she is on a netball scholarship.

She is studying towards a Bachelor in Sport and Recreation Management, and loving it.

The university has given her the flexibility to study around her netball commitments and she will focus on her books outside the main season.

For the past few months in Ashburton, she has been working on fitness and weight training, as well as attending some training weekends in Hamilton with her new team-mates.

The gym sessions are aimed at building muscle, power and speed.

Lloyd says the work is paying off and she sees muscle tone on her former “stick” body.

She is keen now to begin the next phase of her netball career, under the guidance of coach Marg Forsyth and former New Zealand defender Casey Kopua, who is in her 15th season for the Magic.

Lloyd said she has a great opportunity to play alongside and learn from Kopua.

“I think of her as a mentor and another coach.

“She is a pretty cool girl and great to talk to.”

Forsyth rates Lloyd’s range and mobility and says the Magic squad has a strong balance of experience and youth that is important for future seasons as well.

Lloyd’s family and friends plan to be courtside for as many Magic games as they can and the former Ashburton College player says that support means a lot.

“There’s a little bit of Vegas in me every time I take the court.”