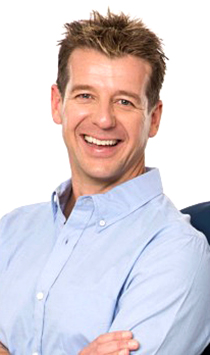 Simon Barnett. Photo suppliedSometimes, the timing is just right and for popular former local, Simon Barnett, that time is now.

The disc jock sent shockwaves up and down the country yesterday when it was announced that he would be leaving his regular slot on the More FM morning show and taking up a role within rival company, Newstalk ZB.

For 26 years thousands of New Zealanders, particularly those from the Canterbury region, have enjoyed Barnett’s dulcet tones in the morning on their annual pilgrimage to the workplace or as they potter around at home.

But after close to three decades of doing the same thing over and over again, he’s decided enough is enough.

And good on him too.

After being so successful, for such a long period of time it can’t have been an easy decision to change things up.

Not so much changing roles, but particularly changing companies.

Barnett has been the face of More FM for longer than most of us would care to remember.

It’s been his voice we’ve associated with the channel. And it’s been his delivery style and passion that has helped give the station a rise in popularity over an extended period of time.

The shift to Newstalk ZB will bring a new version of the now jovial and almost joking type of Barnett than we are used to.

A more traditionally straight station which tends to tackle the harder issues constantly, Barnett will have to adapt himself into a new version of himself and his success will be a measure of just how he handles that change.

He also joins a whole new stable of hosts. His right-hand man, Gary McCormick won’t be there for familiarity. Phil Gifford is nowhere to be seen either. So, it’s Si on his own, but not quite yet.

Yesterday’s announcement included the fact that he would remain with More FM until the end of 2018 before taking up his new role.

That should give enough time for his current employers to sort out a decent farewell. 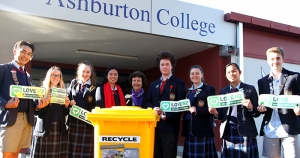 Reading, (w)riting and (a)rithmatic and now being complemented by their more modern-day cousins: “reduce, re-use, recycle” and to reinforce the importance of the latter, a new recycling scheme is being rolled out at the school next term.

Envirowaste educator Sheryl Stivens has been working with the school’s environment committee to get the scheme up and running.

Sponsorship of $3700 will mean 30 bright yellow recycle bins will soon be placed around the school, along with labels and promotional material so students are reminded what can be recycled and what must still be placed in rubbish bins.

Stivens, who was at the school yesterday to tell Year 12 and 13 students about the initiative, said the aim was to reduce the amount of material that ended up in the landfill.

“Not only is it a waste of resources, it’s incredibly costly,” she said.

She ran through a list of things that should go into the new recycle bins but stressed that disposable coffee cups and chip pottles were out, as they have a plastic or wax covering that makes them non-recyclable.

All recycling collected at the school will go to the materials recovery facility (merf) in Timaru, where it will be mechanically sorted and baled, ready to be processed and turned into new products around the world.

Stivens said it was very pleasing to see young people get behind the scheme.

“It’s absolutely brilliant. It’s the old thing – never believe that a single person, group or idea cannot make a change,” she said, referring to the drive behind the initiative was students wanting to take action and do something about the litter they saw. 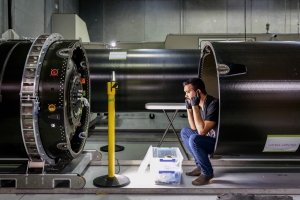 Pete Datlen at work in Rocket Lab's facility. Photo Ian Teh for Bloomberg Businessweek.The sky is certainly no limit for former Ashburton College student Pete Datlen, who is working in his dream job in the aerospace industry.
Datlen, whose last year at college was 2007, works for Rocket Lab, who last month successfully launched the first orbital-class rocket into space from a private site on the Mahia Peninsula.
The launch was surreal, he says.
“It was, without a word of a lie, the most exciting thing I have ever been a part of. The moment the engines ignited and the nose of the rocket appeared from behind the plume … the room erupted. It was deafening and the whole room was electric.”
Datlen is one of three vehicle assembly technicians with the company, assisting with building vehicles for Rocket Lab.
Ten years earlier in his last year at Ashcoll, Datlen had no idea what he wanted to do with his life. He says he was never a straight A student, but he made a decision to do what he loved and tackled everything at 100 per cent, including school activities as Green House vice-captain. “Although I was terrible at almost everything, I really enjoyed all of it!”
He particularly remembers his form teacher Karen McKenzie, who always had words of encouragement. “I can remember so many great things she used to tell me. ‘Pete, how are you so great?’ ‘Pete, you’re the coolest guy I know’, ‘You’re going to be president one day kid’, among other things!”
When Datlen’s father died in a plane crash during his last year at school, he decided to join the Royal New Zealand Airforce and became an aeronautical technician.
He then trained as a commercial pilot before ending up in the aerospace industry working for Rocket Lab.
It is a dream job, but he typically downplays his ground-breaking work to stay humble.
“As a small town boy born and raised in Ashburton, it’s important to me to not forget where I came from and all the people that have helped me along the way. I owe almost all of who I am to Ashburton and especially to Ashburton College.
“I never considered myself a particularly smart guy and I wouldn’t say I was ever top of my class in anything, but I decided to do what I love. The encouragement from teachers, friends and family are a huge part of the reason I’m doing what I love today, but more importantly, I never told myself I couldn’t. It’s cliché, and I hate myself for saying it, but find something you are passionate about and put everything you have into it
“As the great Joe Dirt once said, ‘you can’t have “no” in your heart’.”
Looking back, he says he is grateful and fortunate.
“I guess what I take from everything is that you don’t have to know what you’re doing or where you’re going, but it’s important to be passionate about something. Work hard no matter how minor your job is. Put everything into making yourself and what you do better, and the opportunities open up.”
He sees exciting times ahead for the aerospace industry and launching the rocket was a huge step for the company, and the country.
“If we keep sending rockets up and fine-tuning them then the opportunities for us are endless for everyone. More satellites mean greater things like worldwide internet in third world countries.”
Datlen, who is now based in Auckland, says he still makes it home to Ashburton to catch up with his mum Ningsih and friends for important occasions.