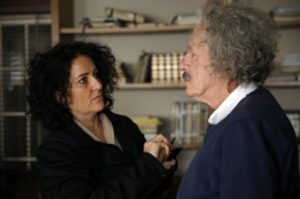 Davina Lamont works her magic on Einstein actor Geoffrey Rush. Photo supplied.Ashburton-raised Davina Lamont is in the running for a make-up artist award at the Emmys.

The American entertainment industry awards recognise excellence in all aspects of television and Davina has been nominated for her work on Genius, a National Geographic Channel drama charting the life of legendary physicist Albert Einstein.

Her journey to the top of the profession began after a year-long make-up course in Christchurch, after she left Ashburton College at the age of 16.

Before that she attended Netherby and Hampstead schools and Ashburton Intermediate.

“I first thought I wanted to be a sound engineer, but I walked past a make-up studio in Christchurch one day and it struck a chord with me.

“I’m very much a free spirit and I love doing what I do.”

The big break for Davina came five years into the profession, when she landed a job on Lord of The Rings.

For almost 25 years she has worked on dozens of films and television productions.

Her skills with wig making, prosthetics and make-up have featured on vampire flick 30 Days of Night, Sherlock Holmes, Avatar and mini series Sons of Liberty, to name but a few.

She has worked for top directors like Peter Jackson, Steven Spielberg and Jane Campion and with a number of top Hollywood actors.

Working on Genius with actors Geoffrey Rush and Johnny Flynn has been “brilliant”, she said.

There had been lots of prosthetics, wigs and facial hair needed to age both actors, as well as the trade mark Einstein moustache and halo hair style.

The ageing needed for the role had spanned the period from the 1890s until the 1950s.

The series had been filmed in the Czech Republic and she would work on a second series later in the year.

She usually spent 10 months a year working overseas, but had a home in Queenstown and made regular visits to Ashburton where she caught up with her parents, siblings and old school friends.

Davina will be in Los Angeles on September 10 when the Emmy award winners are announced. 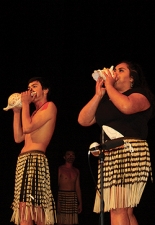 Kapa haka teams from Netherby, Borough, Hampstead, Ashburton Intermediate schools and Ashburton College journeyed south to take the stage at the Theatre Royal, and compete at the annual festival of Maori arts.

Ashburton’s entries were all in the kapa haka category, in senior and junior divisions.

Claire Robertshaw, head of arts and languages at Ashburton College said it was a “big, long day” for performers, but the kapa haka group had done their college and tutor proud.

She said the team picked up second prize in the competitive senior kapa haka section, along with a “very exciting” scholarship prize from ARA.

Serenity Timothy of Year 13 also walked away with second-place prize for the female leader category.

Hampstead principal Peter Melrose said students from the Hampstead School Kapa Haka Ropu came home from the event “tired and with lots of stories to tell their families and friends”.

He said the performers also relished the opportunity to watch older students from Ashburton College and Ashburton Intermediate perform because it “gives them an aspiration to work towards”.

“We see our students in Intermediate and College groups and cheer even louder for them – it is great to see that growth and continuity of skill.”

The FLAVA festival has been running for 11 years and is open to all childhood, primary and secondary schools and tertiary education facilities between the Waitaki and Rakaia rivers.

It is organised by Arowhenua Whanau Services and continues to grow in popularity and size each year.

Mid Canterbury netballing star Kate Lloyd has moved from strength to strength in 2017, and has capped it off by signing with the WBOP Magic for the 2018 ANZ Premiership season.

Only just over a month since returning from the Netball Youth World Cup in Botswana with a gold medal, Lloyd has jumped ship from the Mainland Tactix to join the Magic.

Magic coach Marg Forsyth said Lloyd first came to their attention in a clash between the Tactix and Magic last season, where Lloyd came on at goal defence.

“We noticed she had range and mobility, and obviously she was in the U-21 squad that won the Youth World Championships in Botswana so we saw her there as well,” she said.

Forsyth said building a squad with a strong balance of experience and youth was important to build for the future seasons as well.

When it comes to developing for the future, Lloyd will have one of the most experienced defenders in New Zealand Netball to learn from, Casey Kopua, who will be entering her 15th season with the Magic.

“We are not only happy with what she (Kate) can offer on the court at the moment but what she can offer in the future as well,” Forsyth said.

“It is important for her to develop and for someone like Kate to be able to learn from someone like Casey Kopua is a really big thing for her.

“Being able to play, train and learn strategy from her is a great benefit for her as a player.”

Lloyd was called in to the Tactix squad at the start of 2017, and spread her time between the main team and the Beko Development league squad.

The WBOP Magic squad for the 2018 ANZ Premiership is: