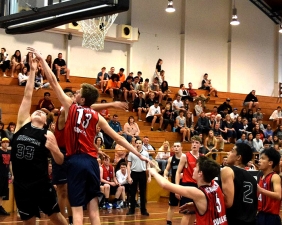 Ashburton College’s Josh Lowe attempts to block a shot in his side’s 83-72 loss to Burnside in the final of the Canterbury Basketball Association’s U-20 competition.The Ashburton College senior boys’ team was a beaten finalist in the Canterbury Basketball Association’s under 20 competition on Saturday, but it was a close-fought battle with winners Burnside.

The two teams have duelled several times this season in the under 20 and school competition with Burnside continuing its narrow advantage 83-72 at Cowles Stadium.

AshColl held a 40-33 lead at half-time and was up 57-50 at three-quarter time, but a massive push by Burnside in the final 10 minutes gave them the trophy.

“The final was a very evenly played game for three-quarters as both teams went point for point, said AshColl coach Pip Johnston.

“Both teams would have a couple of runs and try to pull away but every time this happened the other team would rally back and close the gap.

“Heading into the fourth quarter we were up and the boys were playing really well until Burnside got the better of us and started to make shots and we couldn’t hit anything.

“We had one last crack at them with two minutes to go and down by six, we got fouled and went to the line.

“Then we were down by four but Burnside turned up the heat and splashed two 3s to put them up by 10.

“The boys were deflated and couldn’t bring it back.”

Top scorers for AshColl were Fletcher Arnold on 20 points and Josh Lowe on 19.

Arnold was named in the grade’s first five.

“Overall I’m very proud of making the final in our first year and thought the boys played their hearts out.

“A huge thank you to all the parents and friends of the boys that came up to watch and cheer us on,” said Johnston.

AshColl played under Basketball Mid Canterbury as a club side in the Saturday competition, which involved travelling to Christchurch for 17 games since the season started in April.

While the extra game time helped the team’s performance in the school-based Thompson Trophy competition, it also exposed the players to playing possibilities once they leave college.

Johnston himself has played in the Canterbury premier competition since leaving school; he put that aside this year to concentrate on coaching.

“The boys have put in a lot of hard work over the season. 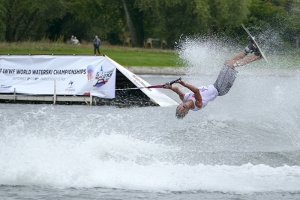 Part of the team of six New Zealand skiers that competed at the event, Donaldson was the highest scoring member of the team, finishing 18th in the overall standings for men.

With the choppy conditions in Choisy-le-Roi, Paris, proving challenging, many skiers struggled to match personal bests.

“Ryan Dodd, who is the world record holder for the jump, which he set this year, was nine metres off his best, so when Hugh was only two metres off his personal best, that is pretty impressive,” mum Janeen said.

“It was an amazing experience, it was a really big thing over there. The event was structured around the television schedule and there was high up diplomats there,” she said.

“They bussed in school kids to cheer on the French skiers and the support was really big, especially on the weekends.

“For the prize giving, the bus was running late because of the French team, so we had a police escort through the city. It would have normally been an hour’s  drive but instead it only took 20 minutes, and that was pretty special.”

Despite it being his first senior world championships, Hugh said nerves were not an issue.

“I was probably more nervous for the junior worlds. There I was just going to ski and see how I went,” he said.

Mum Janeen said the focus would now switch back to school, before the big events such as the Australia New Zealands and the Oceania Championship are held in the first third of next year. 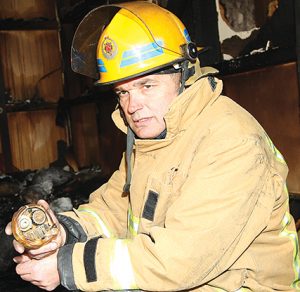 Kevin Donaldson. Photo supplied.Two Mid Canterbury firefighters have returned safely to their families after helping to tackle blazes in Canada that “made the Port Hills fire look like a little barbecue”.

The gruelling trip involved 12 to 15-hour working days and temperatures of up to 41°C.

Firefighters worked 14 days, had a two-day break, and then worked another 14 days, and were accommodated in tents at a site near Kamloops.

Currie said he lost around six kilograms during his time working in Canada, but had gained a lot in the way of knowledge and newfound respect for the power of nature. “I’ve never seen anything of that size and I probably never will again.”

Alongside the flames and heat, the firefighters had to negotiate unfamiliar and often tricky terrain, keep an eye out for black bears and snakes, and familiarise themselves with escape routes from the flames.

“You’ve really got to have your wits about you. You can’t be in the wrong place at the wrong time,” Currie said.

Donaldson said the arduous work, early starts and constant hazards made for immense fatigue. “By the last three or four days, if you even stood still you might just fall asleep,” he said.

Both firefighters said they had brushed up their rural firefighting skills significantly and described the trip as a “great experience” overall.

“It was absolutely amazing, and there was really good camaraderie between all the firefighters,” Currie said.

“It was a real privilege to be selected. A lot of firefighters would have loved to have gone,” Donaldson said.

He was also hugely grateful for the sacrifices and efforts put in by the families of those who went, including his wife Glenda who had been tackling lambing season on their Ashburton lifestyle block.

Firefighters were only given about three days’ notice before departing to Canada at the start of August.

“I would do it again though,” Donaldson said.