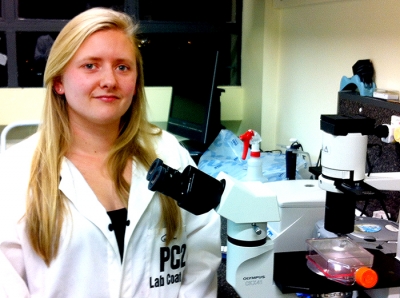 Sam, 25, is finishing her PhD in biochemistry at the University of Canterbury and her research project is understanding the role of estrogen-mimicking compounds in the development of breast cancer.

Breast cancer needs estrogen to grow; some foods we eat and some cosmetics we use mimic the hormone, so knowing more about them is important.

Breast cancer has affected Sam’s family and she lost a great-aunt to the disease in 2010, her final year at Ashburton College.

She was studying all three sciences at the time.

“I always knew that I wanted to do something ‘sciencey’, but never decided on biochemistry until halfway through Year 13.

Outside the classroom, Sam played netball for the college and cricket in the summer.

She was also part of lip sync, Festival of the Spoken Word and music evenings.

Moving to Christchurch to study at the University of Canterbury has led to research trips to Amsterdam and the United Kingdom.

Her focus is on prevention rather than treatment or detection.

“My hope is that we can get some funding which would allow me to continue my research, particularly as the results are proving extremely fascinating.

“My dream job would be to set up a charity or foundation for cancer prevention.”

She says people are exposed to estrogen-mimicking compounds in their day-to-day lives through things like food and personal care products.

“By understanding the contribution of these compounds to breast cancer risk, I hope to be able to help women reduce their risk of developing it by making simple lifestyle changes.

“If women are provided with this information, I hope it may lead to a reduction in the incidence of breast cancer around New Zealand.”

Sam says people are keen to know more about her research.

“Everyone knows someone who either has or has had breast cancer.

“It’s definitely something people are very aware of and there is more of a base knowledge compared to other scientific fields.”

While Christchurch is now home, Sam says having family – parents Sue and Richard, and brothers Jack and Tom – close by is important. 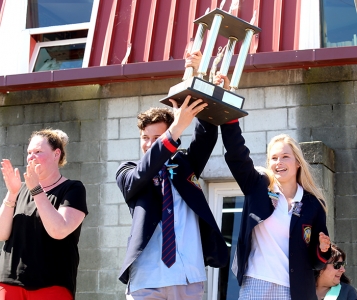 Students and teachers amassed under the sunshine  to celebrate cultural and sporting successes, hear a final address from their head boy and girl and pitches from next year’s candidates, and discover the winner of the coveted house trophy.

It is the third year in a row red have taken home the trophy, after 16 years without winning.

Principal Ross Preece also stepped up to hand out 11 prestigious colours awards for national sporting and cultural success, and reflect on his first year at the helm of the college.

“I’ve been impressed by both the variety of sporting and cultural activities and the number of students that have stepped up,” he said.

He said the conduct of the students beyond the college gates had also impressed him.

Head boy Nic Thomassen and Samantha McArthur gave their final address to students, handing over to next year’s candidates.

Thomassen said 2017 had been “the best year of high school, without a doubt”.

“The end of the year brings a big ball of emotions,” McArthur said.

“I’ve been so happy with what I’ve learnt and achieved.”

Senior students have one week of classes left before study leave, and begin sitting their NCEA exams on November 9.

Year 9 and 10 students wrap up school on December 7 and 8 respectively. 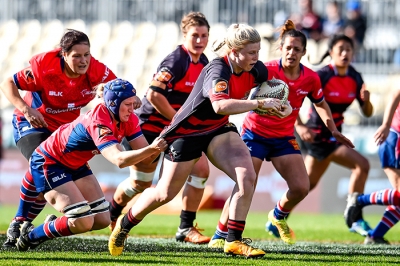 Nicole Purdom Photo PHOTOSPORTMid Canterbury’s Nicole Purdom will be hoping she can finish the representative season on a high before she packs her bags and heads overseas.

The loose forward is in her third season playing for Canterbury, and will be hoping to take to the paddock in the final of the Farah Palmer Cup this Sunday.

“They last played in the final in 2013, the year before I arrived so it will be good have a go in it,” she said. “With the team we have it is definitely something we are capable of winning.”

Like many other New Zealand rugby fans who are in their 20s, the 21-year-old grew up following Dan Carter, before looking towards the big name women’s players such as Kendra Cocksedge, who she now calls her team-mate.

“She also plays for my club team which is a pretty cool thing,” she said.

After the 80 minutes or more against Counties Manukau is up next week, Purdom will not have any time to put her feet up, as she will be packing her bags, ready to move to Ireland over the summer.

“I have just finished my degree at university so I will be heading over there to play and do a bit of coaching,” she said.

“I will be doing work coaching trying to help them get their game up to the New Zealand level.

“They had the World Cup in Dublin this year and they have only had women’s teams over there for a few years so it should be interesting.”

There is every chance Purdom could be joined by another Mid Cantabrian on the field on Sunday, with Melanie Puckett featuring on the bench for the side in their semifinal victory against Waikato.