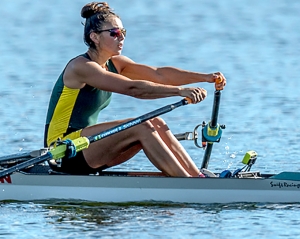 Wall, 18, actually took silver in the under 22 singles, but her blistering time of 7.33.14 was more than a second faster than the world record for junior rowers, set by Clara Guerra in the Netherlands in 2016.

She returned to the water later in the day to comfortably win the women’s senior single sculls in 8.31.75 and the under 20 singles in 8.12.22. She also teamed up with her Ashburton Rowing Club team-mate Grace Wilson at the championships to win the under 19 double sculls and take silver in the under 20 double sculls.

Wall’s outstanding display of potential will surely have cemented a spot in the New Zealand team to compete at the world junior rowing championships in the Czech Republic in August.

“I didn’t have that time in mind, I just wanted to row the best I could.”

The teenager, who has deferred her university education to pursue rowing, will likely move to Rowing New Zealand’s high performance base in Cambridge later in the year where she is able to train with the national under 23 squad, as well as the juniors, before the world championships.

Coach and father Justin Wall said it had been an amazing week for the whole contingent of Ashburton rowers, which collected a haul of three gold, three silver and two bronze medals.

“It has been awesome right across the board,” he said yesterday from Wellington, as he was waiting for the ferry to cross Cook Strait and continue the long haul home with their boats.

“We were in nine A finals and in some of those finals we had three crews.”

Sisters Mollie and Olivia Gibson won silver in the under 19 doubles and bronze in the senior women’s doubles, and Terry O’Neill won bronze in the open para event.

Matt Rae and Haxby Hefford were also in A finals for club singles and doubles and they combined with Timaru rowers Michael Wall and Cameron Moffat to make the A final of the club quad, where they came fifth.

Mollie Gibson was fifth in the senior women’s singles (behind winner Wall) and Wilson eighth.

Wall said the results showed how much the club had grown in the three years since his daughter was the only representative at nationals.

Their hard work has not gone un-noticed.

“The feedback is we are punching well above our weight.

“Our crews go there and get into finals and there is a lot of positive vibe around the club and Lake Hood.”

Wall said all the rowers handled multiple events across the five-day championships and their workload reflected their training ethic and ability.

There will be no rest for Ashburton College rowers in the squad though, with the Canterbury junior regatta at Lake Hood this coming weekend, then South Island secondary schools and finally, Maadi Cup in March. 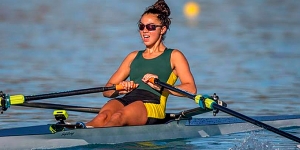 Rain that dogged the event earlier in the week cleared and some blistering performances have resulted in the biggest number of A finals the Ashburton club has ever had at the national regatta.

Some of the first rowers on the water today will be sisters and doubles team-mates Olivia and Mollie Gibson, and Grace Wilson and Veronica Wall in heats for the under 19 double sculls.

Terry O’Neill is next up in the A final of the open para single sculls event.

The Gibsons, Wilson and Erin Connelly-Whyte then team up in the A final of the senior women’s quad at 8.45am and two hours later Matt Rae, Michael Wall, Haxby Hefford and Cameron Moffat combine for the A final of the men’s club quad.

At 11.45am, the senior women’s doubles A final has two Ashburton crews at the start line – Wilson and Connelly-White, and the Gibson sisters.

Wilson is back on the water at 1.15 to team up with Wall in the A final of the under 20 doubles.

Rae and Hefford complete the day’s racing at 1.45 in the A final of the club singles.

In the semi-finals yesterday, both rowers needed to finish in the first four of their separate races to qualify for the final.

The two men combined in the club doubles to finish fourth in their semi-final, and qualify for the A final.

Wall, Wilson and Mollie Gibson were also on the water yesterday in the semi-finals of the senior women’s singles, all three advancing to the A final on Saturday.

Wall will be working hard to impress selectors of the New Zealand under 23 and junior teams, the latter which will attend the junior worlds in Racice, in the Czech Republic, later in the year.

She is already through to the final of the under 22 single sculls tomorrow morning and at close of rowing last night she had not been beaten.

Around 800 rowers, including premier scullers like Mahe Drysdale, will take to the water over the course of the championships. 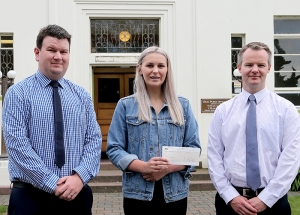 Maslin has been selected by the Ashburton Law Practitioners Society (ALPS) as the recipient of their annual scholarship, and will be embarking on her law studies at the University of Canterbury with less financial burden.

Maslin has received $250 upfront to help her with her studies, and will receive an extra $750 if she continues through into the second year of law.

Ashburton Law Practitioners Society Secretary Andrew Mitchell said the scholarship is given to a student who has not only achieved academic success in their NCEA results, but has proved themselves to be “well-rounded”.

“It’s for someone who has a clear passion, as well.”

All Year 13 students from Mount Hutt College and Ashburton College intending to study law are eligible for the annual scholarship.