Alison Driscoll (nee Gill 1971-74)
Orange House
Alison enjoyed her basketball and her favourite subject was history. She remembers one of her maths teachers hiding behind the door with a fire extinguisher to “welcome” tardy students.
Not surprisingly, maths was not her favourite subject.
Alison put her wordsmith skills to good use after leaving school, working for the Ashburton Guardian and the Press before leaving to work on the farm with husband John and raise a family. She returned to the Guardian in 1996, then in 1999 she and John bought the Bernina shop in Ashburton.
She worked as a personal assistant for National’s Rangitata MP Jo Goodhew for nine years and now works for Andrew Falloon, who won Goodhew’s seat at the last general election.

One of the songs written by Cat Stevens, now known as Yusuf, included the lyrics remember the days of the old school yard, we used to laugh a lot.
For most of my school contemporaries there were just two old school yards. The grounds around the primary and secondary schools we attended.
Most of us had not gone to pre-school, kindergarten or intermediate, it was just primary and secondary for us.
Although we only spent time around two school yards where we did laugh a lot, many of my class were actually pupils of two schools at the second site of our education.
When we ended our fourth form (now year 10), Ashburton High School and Hakatere College were amalgamated to form Ashburton College, and all of us from both former schools who experienced that can look back on attending great places of education.
School days are formative years, a time when we often make lifelong friends and develop both career and recreational interests.
While my High School class was not the final one to enrol at Ashburton High School, it did have the distinction of being the last one to complete all our secondary education at that site.
When Ashburton College, began the junior school was based at the former Hakatere site and the senior school, which we joined, remained where we were.
It was the teachers who often moved up and down Cass Street in Bedford vans with sliding doors, in what appeared at times to be a rather interesting and possibly life threatening logistical exercise.
In another song of the time Bob Dylan said the times they are a changing.
And they certainly were! Influences like The Beatles and changing social attitudes had come along.
Cars were changing too.
We were introduced to the Mini. Both the car and the skirt! By this stage many of us had become interested in Minis. Of both varieties.
Looking back we didn’t just talk about cars but they were something of interest. Shared interests lead to many friendships and quite a few funny stories.
Students and those who pass by Ashburton College these days may find it hard to believe that back then it was uncommon for any of us to drive to school.
But those who did sometimes paid a price.
Just as a classmate was about to drive off others would often lift the rear of the cars, leaving the back wheels spinning and the car and its unfortunate driver going nowhere.
It was just one of those harmless pranks which became a tradition.
But then along came the Mini – the car variety – which was front wheel drive.
We talked a lot about this incredible innovation, being little aware that Andre Citroën had introduced his famous traction avant (front wheel drive) many years before … and this leads to a school memory that has remained in the minds of many of us.
You see it wasn’t only pupils who were subjected to the tradition – we treated our teachers equally – so if the occasion was right, maybe a birthday or a teacher leaving (mind you with great kids like us why would they want to?) they were given the treatment too.
Amongst our teachers was a gentleman who taught French and was obviously very interested in the culture of that country.
To us he seemed the epitome of a Frenchman, often wearing beret and driving a Citroën Light Fifteen.
For whatever reasons his day and his turn to experience this wonderful tradition finally came.
Just as he was about to drive off, the back wheels were lifted off the ground but the joke was on those who did the lifting, they found out Minis were not the only cars with front wheel drive.
It probably looked quite funny - a Citroën taking off down Grey Street with several chaps being dragged behind it and the driver possibly singing Viva la France!
All the drag and lifting the holders could muster was to no avail so finally they were forced to let go.
The car and no doubt the driver still resplendent in his beret gave a bit of a lurch and a bump then carried on while those involved swallowed their pride.
Gradually during our final years, one or two did get cars and I recall one classmate inheriting his grandfather’s Model A canvas top truck.
One Monday he recounted being at a rather posh weekend party during which some ponce in an attempt to embarrass a young fellow asked “and what kind of car do you drive?” to which he retorted “a Ford convertible”.
Perhaps it was during those days that our classmate Murray Sinclair, who has very successfully competed and made a name for himself in classic car racing, developed his interest.
They were good days.

Bernard penned these memories for a 50th year-group reunion in 2013, and he still stands by them! They were originally printed in the Ashburton Guardian at the time. 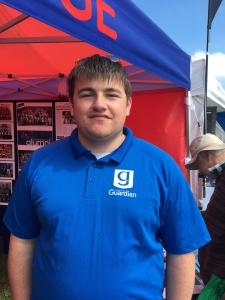 Jaime Pitt-MacKay (2012-2016)
Orange House
Football was Jaime’s passion at school, and still is. He played for the First XI.
His most memorable moment was during a school trip to Germany, when his hotel room in Berlin was robbed. The room was so untidy, it took him 30 minutes to realise his camera was gone.
At school, he was part of “The Nerd Herd” along with Millar McLauchlan, Harry Fleming and Robert Wilson. His favourite subject was German and teachers he remembers fondly include Ken Pow, Michael Clark, Graham Bock, Jason Vannini, Mr Saunders and Miss Lee.
Since leaving school at the end of 2016, Jaime has been working at the Ashburton Guardian as a junior reporter.