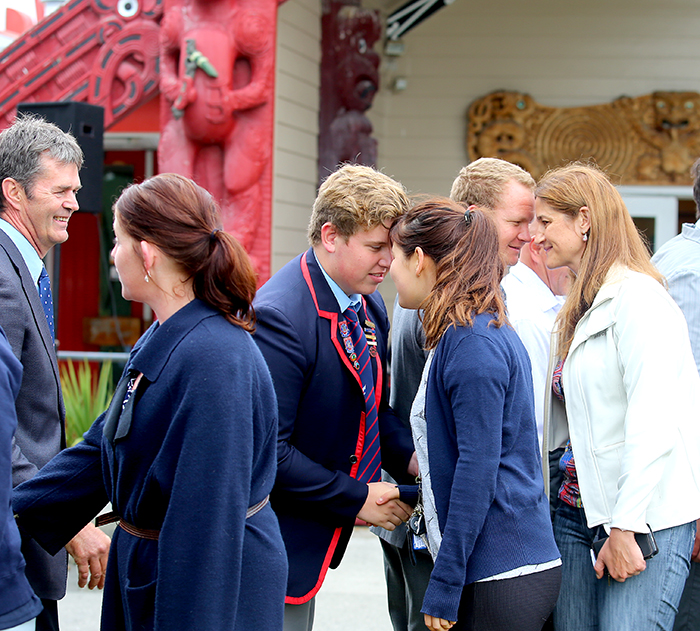 Held on the first full day of the school year, the ceremony saw the school’s Te Whare O Tawhaki matua Tiipene Philip speak in Te Reo to welcome Preece, as well as new students and teachers.

Preece spoke to the school’s assembled students and teachers, as well as special guests from the community.

He said he was satisfied with his first judgement call as principal, as it had not rained.

He said schools spent a lot of time marketing, however, students themselves were the best marketing agents, and he asked those at Ashburton College to be mindful of three simple things, which were all free.

They were maintaining a tidy school uniform, being friendly and helpful, and regularly picking up just one item of rubbish in order to keep the grounds clean and tidy.

At the end of the ceremony, college and community leaders welcomed newcomers with a hongi. 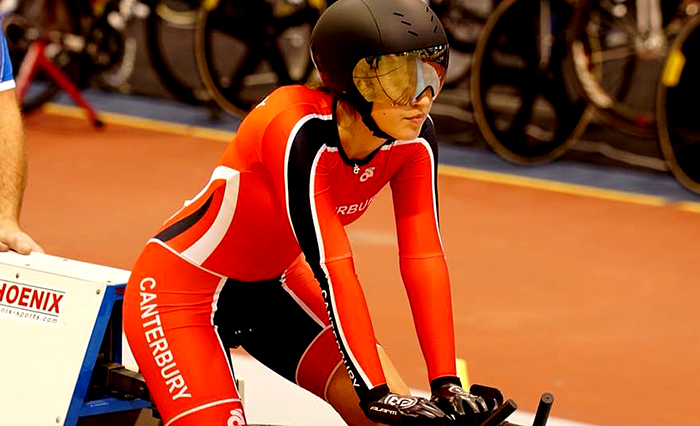 After four previous trips to national championships, her first attempt at the U19 level has yielded success. Banks claimed one gold, one bronze and two fourth placed finishes.

Riding in the red of the Canterbury team, she finished fourth in the match sprints and in the team sprint.

Banks also claimed a bronze medal in the elite women’s category of racing, as a member of the team that placed third in the team pursuit.

The biggest prize of the championship for Banks however came in the U19 women’s keirin, where she finished first place and claimed the gold medal.

She said she was very happy with the result as her goal heading in to the event was a top five finish.

Banks said her coach Terry Gyde was a big help in her winning the race.

“Strategy is a very important part of the race and he really helped me suss out how I was going to ride on the day,” she said.

Track training and racing had been a heavy part of Banks’ twice-daily training routine for the championships.

Banks’ focus will now turn to the age group track national championships and elite and U19 omnium championships being held in Cambridge during the middle of March.

Mid Canterbury lads Willie Murney, Simon Adlam, Phil Prendergast and Neville Prendergast with the Tavistock colt they sold at Karaka this week for $200,000.An intrepid move to buy a $3000 weanling filly, race her and then mate her with a stallion standing for $7000 brought about one of the best feel-good stories at Karaka this week.

A group of Mid Canterbury rugby and harness racing mates agreed to race Pyrus filly Shamrox from the Ashburton stable of Danny Champion, who bought the horse as a weanling out of the paddock from breeders Edwina Morris and Alan Jones.

The massive filly prevailed at better than $9 and then went on to win at each of her next three starts, leading to an audacious start in the Group 2 Coupland’s Bakeries Mile at just her fifth start.

Shamrox ran a gallant fifth and while she would go on to place three further times in her career, niggling issues led to an early retirement.

The group decided they’d like to breed from her and sent her first to Captain Rio, then on the advice of Sir Patrick Hogan to Tavistock.

“Simon was reading through a Cambridge Stud brochure and rang up about Keeper.

Sir Patrick said ‘listen, I think Tavistock is the next big thing’ so we took his advice and bred to him,” Neville Prendergast says.

While they were primarily breeding to race, they decided that when Shamrox produced a Tavistock colt after leaving a filly from her first mating to him, that they might like to have a go at the yearling sales.

As it turned out, their timing couldn’t have been any better and Tavistock, just as Sir Patrick had predicted, had become the next big thing.

The Shamrox colt, consigned to Adrian Stanley and Hannah Kettlely’s Woburn Farm, was selected for the premier session of the New Zealand Bloodstock Yearling Sales Series.

Having got over the false start of mistakenly booking the flights north in time for the standardbred yearling sales, the group made a weekend of it, heading to Ellerslie for Karaka Million night and then on to the sales, albeit with reservations.

“I was absolutely crapping myself – we all were,” Prendergast said. “We could see that if you had a quality horse, they were selling well but below that it was pretty hard work.

“We knew he wasn’t that strong on pedigree but he was a really good type and he was by Tavistock.”

The colt quickly hit the $120,000 reserve and then kept going up in $10,000 bids as Waikato bloodstock agent Bryce Tankard and Singapore trainer Cliff Brown went head to head, with the gavel finally falling at $200,000 in Tankard’s favour.

“We were pretty much in shock and awe,” Prendergast said.

“It felt real when we got to the reserve but when he reached the level he did … well, we’re still having a hard time coming to grips with it.

“We’re just pleased he’s gone to a good home and he’ll get his best opportunity.

“It was Danny [Champion] who put us on to Adrian and Hannah and we’re just rapt with the job that they did for us.”

Prendergast, who between him and his brother Phil played more than 130 games for the Mid Canterbury rugby team, said the experience had whetted their appetite to get more involved in breeding and selling.

“It’s a real buzz and we all said we’d love to do that again.

“We might just be on the lookout now for another filly to race with a view to becoming a broodmare.”