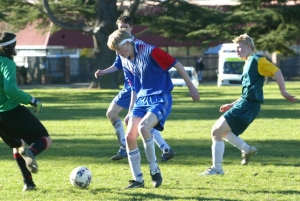 Peter Mee. Photo suppliedAshburton College's Peter Mee keeps the ball at his feet during his side's 3-2 loss to Rangiora High School during yesterday's exchange between the two schools. Consistency throughout most of the sports on offer saw Ashburton College eke out a 9-7 margin against Rangiora High School in the inter-school sports exchange held yesterday. The 16 clashes, held in Rangiora and Ashburton produced some close contests and some one-sided affairs. Ashburton College took care of the badminton, golf, hockey, netball, shooting and squash, while honours were shared in basketball. The netball match between the two schools' A teams was the contest of the round with Ashburton coming out on top 29-28. Rangiora won the equestrian by five points and also dominated the soccer and the rugby, where the girls side won 72-0