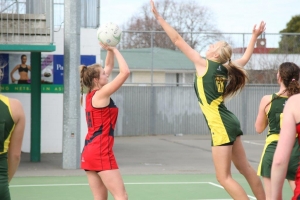 Ashburton College's Tessa Morrison lines up a shot over the Rangiora defence during yesterday's inter-school sports exchange. Photo Donna Wylie.Ashburton College dominated their annual winter sports exchange with Rangiora High School yesterday. Ashburton hosted all of the 14 matchups and won 10, losing three with one draw. On the basketball court the Ashburton senior boys' won 52-43 and the junior boys 74-50. The under 15 rugby went the way of the hosts 39-29 and the Ashburton 2nd XV won 27-13. The Ashburton squash team won 4-0 at the Ashburton Squash Club. The Ashburton boys' football 1st XI won 4-2 but the girls' went down 0-1. The girls' hockey was a 1-1 draw but the Ashburton boys' had a 10-1 rout over Rangiora. Ashburton won the 9A netball 36-26, the 10A netball 27-26 and the senior B 39-26 but Rangiora won the A-team clash 35-27. The shooting had Rangiora more on target to take the win. The college sports field will be quiet next week for practise exams before teams spread out across the south Island for the annual winter tournament week.