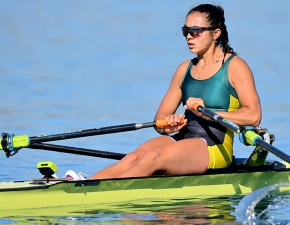 Veronica Wall in action on the water. Photo supplied.Former Ashburton rower Veronica Wall was named in the Rowing New Zealand Under 23 Squad on the weekend.

The outstanding performer and former Ashburton College student has been firmly in the sights of national selectors for a number of years now, and after a strong performance at the recent National Championships on Lake Ruataniwha, her selection should come as no surprise to anyone.

Late last year Rowing NZ announced it did not intend to send athletes to compete at international regattas this year, with the exception of the final Olympic Qualification Regatta and the Tokyo Olympic Games.

However it is still their intention to select and support age group squads, irrespective of the international travel hold.

The under 23 campaign has expanded to include a winter training squad which includes athletes who are no longer eligible for the age group, but are meeting targets which put them in contention for Paris 2024 Olympic selection.

A number of other rowers who are currently based in the US who have attended Rowing NZ development camps are being considered as well, post their end of year studies.

Wall was one of 11 female rowers selected in the squad, fresh off her efforts at the National Championships.

Competing for Southern Rowing, representing Ashburton, and also for the Rowing New Zealand team – Wall put all her class on the water to win the A Final of the women’s Under 22 single sculls with a six-second victory.

She combined with Kathryn Glen in the Under 22 double sculls, and picked up another success when they won their A Final as well.

Wall’s week closed with an appearance in the Women’s Premier Coxless Quad Sculls, when they finished third in a line-up of some of the most exciting female rowers in the country.

The squad will assemble for training at Lake Karapiro on April 7.