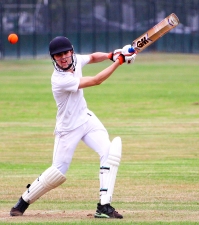 The match, which began the week before, finished on Saturday afternoon when AshColl were asked to bat for a second time, but were unable to reach the first innings score set by their hosts on the opening day of play.

After winning the toss, the locals took the ball, and despite some handy individual efforts they were unable to dominate their opposition, who worked through to 282-6 declared from 57 overs.

Angus Jemmett did the majority of the donkey work with the ball, delivering 18 overs and taking 3-52 in a solid spell.

Angus Spittall and Jack Middleton each grabbed a wicket.

With the bat the AshColl first innings showed some promise.

Devon Flannery (31) and Lachie Jemmett (36) both made valuable contributions but were unable to secure that big partnership which lifted the score total.

AshColl were eventually all out for 122.

Asked to bat again, things went from bad to worse for the young side, rolled by a smart Christ’s bowling line up for 91, with Lachie Jemmett again to the fore with 26 runs and Wil Jemmett also scoring highly with 20.

This weekend the side gets a great opportunity to get a result on the board when they take on North West Youth Cricket on the Ashburton College wicket, although they’ll be praying to the weather gods that things are on their side when the skies clear.

Meanwhile, it was a tough day at the office for the Ashburton College Combined 2nd XI too.

Playing at home against the Sydenham Youth 2nd XI they suffered a six-wicket loss, but wouldn’t have been completely disappointed with their effort.

Batting first they posted 191 with Fletcher Hobbs continuing his great run of form scoring 90 – the third week in a row he’s passed the 50 mark.

Sydenham made light work of the run chase however, reaching the target with just four batsmen back in the shed.