Motivation not an issue for Mid Canterbury

Motivation not an issue for Mid Canterbury 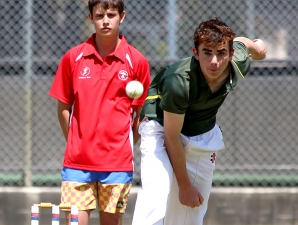 Devon Flannery will make his Hawke Cup debut today for Mid Canterbury. Photo supplied.The Mid Canterbury Cricket side heading to Timaru this weekend to tackle North Otago in another round of the Hawke Cup won’t have to search too far for inspiration to get a result in the two-day match.

They’ll come into the match at Aorangi Oval with a frustrating first innings loss last week to Otago Country – a match which they should have probably won – and they’ll be out to honour a notable milestone for one of the stalwarts of the sport in Mid Canterbury too.

Scorer Bob Bruhns celebrates his 80th birthday this weekend and will be in Timaru with the side and coach Garfield Charles said that a winning result would be a good gift from the side.

“Bob does a lot for the sport, and this team, so a win would be a good result for him,” he said.

Winning might require a little better effort in the field this week than last weekend where seven catches were put down.

“We created 15 chances but only took eight of them.

“It’s not like the boys can’t catch either – they grab everything at training, it was just one of those bizarre performances.”

But there were positives from the match that will be carried through to this weekend’s fixture.

The debut of Angus Jemmett, who scored 108 in his first appearance at Hawke Cup level, and an all round decent effort with the bat from others around him gave cause for optimism.

And after the success of Jemmett, Charles has called in some newbies to see if they can follow suit.

Tom Middleton and Devon Flannery both come into the side for the match and make their Hawke Cup debuts.

Flannery replaces Nick Gilbert, who is overseas, while Middleton has the rather large shoes to fill of Richard Turpie who is out injured.

“It’s a big ask for young Tom, he’s really an unknown at this level – but he’s a good wee bowler and excellent in the field.

“Same with Devon, he’s exceptional in the field and while he might be young he’s very capable with the bat in hand too.”

The only other change from last weekend’s match is the return of Cam Jopson, who replaces Archie Redfern who is also out injured.

Jopson will pick up the wicket-keeping gloves for the match.