‘We need to fix this now’

‘We need to fix this now’ 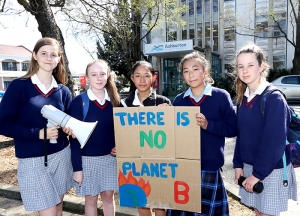 Shortly after protesters poured into Parliament grounds at midday, about 35 Ashburton College students marched with placards from their school grounds, through the Ashburton Domain.

They met with about 20 pupils from Ashburton Borough School, lining the footpath along State Highway One at Baring Square West, getting supportive toots from passing motorists, before taking their protest to outside the Ashburton District Council building.

They were received politely by reception staff as they asked to talk to councillors.

They were told none were in the building, so they left to re-join the other protesters outside.

The five were among those leading the protest, which had its origins in a Year 9 innovation class project, taught by Shelly Robson who also marched.

They were joined not only by classmates, but other students from the college up to Year 13.

Students participating had the support of the college, but had to get permission slips from their parents, and they missed about 20 minutes of classes.

“Our world is down on its knees for help because we are just ruining it,” Paulina said, referring to the burning of fossil fuels and deforestation.

“It’s something we can’t figure out later, we need to fix this now,” Janelle said.

She added it was not fair to put pressure on the likes of farmers, and government needed to help agricultural and other groups in their efforts to reduce carbon emissions.

“What we do now is going to affect every single child’s future,” Mao said.

Maddie Page from Borough said students from her school at the protest, who were accompanied by teachers and the principal, felt the same way.

“Climate change is really affecting us, people aren’t noticing it yet, but soon, if nothing happens, there’s going to be really big changes,” Maddie said.

These included melting of the ice caps, rising sea levels and mass extinction of animal species.

In Wellington, the group of about 5000 protesters was one of the biggest to mobilise in front of Parliament since foreshore and seabed protests in 2004.

Council chief executive Jane Donaldson said late yesterday that while councillors were not present and available at headquarters, the chair of the council’s internal Climate Change Working Group did go out to meet and acknowledge the protesters in exercising their right to be heard.

And council had recognised the need to address climate change earlier this year by adopting a Climate Change Policy in May this year.