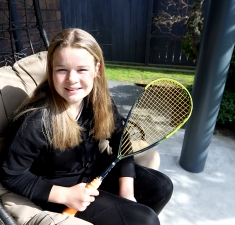 Brooke Cornish-Madden is at the C grade national event in Invercargill this week, followed by the junior nationals in Auckland next week. Photo Erin TaskerBrooke Cornish-Madden has loved playing squash for as long as she can remember, but this year she’s taken that love for the game to the next level.

She’s given up her other sporting love, netball, in order to focus her attention fully on squash, and it’s paying dividends for the Ashburton 15-year-old.

This week she’s in Invercargill for the national C grade SuperChamps competition as part of the Midlands team, and next week she’s off to Auckland for her first tilt at the junior nationals, in both the team and individual event.

And she can’t wait to test herself against some tough opposition, because she knows she’s come a long way in the past year or two.

Cornish-Madden moved to Ashburton two years ago, from Invercargill, with her mum – fellow squash player Karlie McQueen – and her siblings, and joined the Ashburton Squash Club.

“Moving up here has really benefited me, because I don’t think I would be anywhere near as good at this age if I was still living down there, there’s just so many more opportunities here,” she said.

So she has been looking forward to getting back to Invercargill this week to take on some players who she used to be scared to play, who she’s now ranked higher than.

The C grade event is open to all ages and although Cornish-Madden has recently become a B grade player, she was C grade at the time of the year grades were taken for the tournament.

She doesn’t really know what the next couple of weeks have in store for her, she’s just aiming to do her best and keep building, with plans already forming in her mind to really hit the ground running next season.

“I’m not seeded very high, so I just want to finish above where I’m seeded and just try and win a couple of games,” Cornish-Madden said.

Right now she’s ranked about 13th in New Zealand for under-17 squash players and, ultimately, she’d like to crack the top three.

So even though the squash season is nearing its end, there’s spring and summer leagues coming up and Cornish-Madden said there won’t really be such a thing as an off-season for her.

She’s determined and has goals she really wants to tick off.

There’s the goals of winning titles and moving up the rankings, but there’s also plenty to aim for much closer to home.

If Cornish-Madden wants a good hit-out on the court, she doesn’t need to look much further than her own family.

As well as her mum, Cornish-Madden’s dad and brother are pretty handy squash players, with both ranked just outside the top 10 for their age groups in New Zealand.

Her grandparents on both sides also played squash, and her other older brother – although he doesn’t play squash competitively – is more than capable with racket in hand.

With such a strong family involvement, it’s no surprise that Cornish-Madden picked up a squash racket as a preschooler and never looked back.

She’s at the club most days trying to become the best she can be and ticking off little milestones as she goes.

This season she finished third in the women’s open club championships at Ashburton, behind McQueen and Katrina Palmer, well exceeding her own expectations.

And she hopes that’s just the beginning.

Cornish-Madden will be joined at next week’s junior nationals by a fellow Ashburton Squash Club member, Isaac Bazley, who is competing in the individual event.