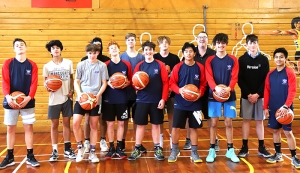 The team is making the trip north to the capital to play the top four basketball schools in Wellington, and will get the chance to learn a few tips and tricks from Kenny McFadden, who is most famously known for his close association with NBA star Steven Adams.

“On Monday morning we will be going to the New Zealand Basketball Academy, which is run by Kenny McFadden,” coach Mark Douglas said.

“They have been invited for a session so it will be a skills session and a chance for them to learn from a different coach.”

The junior boys’ side took out the mid-grade title for their age grade in Canterbury this year and Douglas said they will all get the opportunity to do it again next year as the same group which is good for stability among the playing group.

“They are still eligible for under-17s next year which is good as they will get some continuity,” he said.