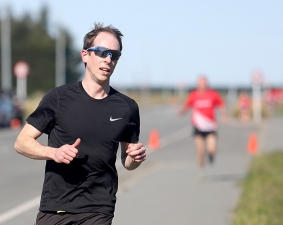 An impressive field of athletes lined up at the start line in warm conditions on what was the last day of winter, to battle it out over varying distances at the Ashburton Business Estate on the northern outskirts of Ashburton.

Coming out on top in the 8.32km senior men’s race for runners was Shaun Clark in 33.27 minutes, while Jeremy Hayes was the first masters athlete home in 33.57 minutes, followed by Joe Ford in 34.40 minutes.

Ian Broadbelt was the first man home on handicap in 39.45 minutes.

The senior women runners contested a 6.24km race and it was won by Ashlea Mulligan in 26.37 minutes.

She was first over the line and first on handicap, while Tam Grant took the masters women’s title in 28.46 minutes.

For the walkers Rob Beale was fastest across the 6.24km distance, finishing in 41.30 minutes, while Robert Moffitt was first man home on handicap in 47.10 minutes, and Marie Batty was the first woman home in 49.08 minutes.