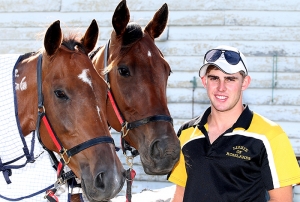 The talented young horseman will line up against 11 of his peers over the course of tonight and then tomorrow in the New Zealand Junior Drivers’ Championships for the best rising talents in harness racing driving from around New Zealand.

With 17 wins next to his name for his career in what is just his second season in the sulky on race day, Morrison is making a pretty good fist of the driving caper – but will head into the series as one of the least experienced and is going up against people who have driven five times as many winners as he has.

But he’s not letting that daunt him.

“You can’t let things like that worry you too much,” he said.

“I’m just really honoured to have been able to qualify to compete in a national championship, it’s going to be an incredible experience to compete against some of the best juniors from around the country in the series.”

The son of well-known Mid Canterbury trainer and saddler Chris Morrison, Johnny is now based in Christchurch and working part-time for strike-rate trainer, Steven McRae of the famous Spreydon Lodge.

He’s mixing his time working for McRae with doing some farrier work around the region for a number of trainers as well as training the odd horse of his own in his spare time.

“It keeps me out of trouble, there’s always something to do.”

Morrison has enjoyed a good season with his 11 wins coming with a couple of weeks remaining before the seasons turn over.

Good mate, and supporter, Warren Stapleton has provided him with four winners this term, while he’s also been able to salute in the colours of two of his other biggest supporters in Michael Heenan and Rex Bennett.

“I’ve been given some great opportunities and wouldn’t be competing in this series without their help.”

The series was due to kick off last night at Forbury Park in Dunedin, but the inclement weather that has caused havoc up the South Island this week saw the meeting postponed and shifted to tomorrow afternoon – so what was to be the start of the competition, is now the finish.

Things will kick off tonight at harness racing HQ at Addington instead.

Morrison has the drive on the Ashburton-trained Bishop Brian in the opening heat of the championship for Dallas Patterson but considered Gunpowder, his second drive tonight, to be his best chance of all.

Tomorrow at Forbury he will drive Caitlin Franco who looks a good each way chance and also Ella Abbe for renowned trotting trainer, Phil Williamson – giving him a good shot at some success.