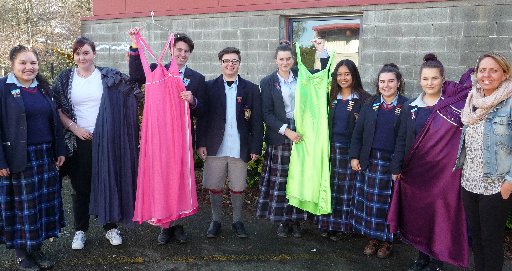 The project, launched earlier this year by Kirsty McGlynn and Louise Duke, will provide the dresses and shoes for the belles of the ball, while local business support will ensure hair and make-up is top notch.

Tickets for the event, costing $85 each, are also covered by generous donations.

The idea of donating unwanted ball gowns for others to use came from Kirsty McGlynn, who rediscovered gowns belonging to her daughters when cleaning out a cupboard.

The call to donate was put out earlier this year and an impressive 100 gowns were given, along with around 50 pairs of shoes.

The six girls taking advantage of the generosity have been nominated by fellow students and teachers at Ashburton College.

Louise Duke said buying dresses and shoes and paying for hair and make-up was expensive for parents and could be prohibitive for some.

Generous donors had chipped in with everything that was needed for a fabulous night at the ball.

“We want to make the girls feel like Cinderella on the night,” she said.

Mrs Duke said the Once Upon a Time project could be rolled out in the future and could also involve gown swaps with schools in other centres.

Planning for the Ashburton College ball started at the beginning of the school year and the event has been driven by a dedicated ball committee.

Around 450 students from Years 12 and 13 are expected to attend the glitzy, glamorous event at Ashburton Trust Event Centre.