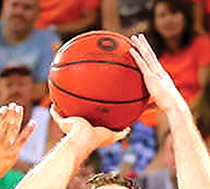 Ashburton College’s Josh Lowe gets his fingers to the ball ahead of Middleton Grange’s Ben Carlile-Smith as their game tips off at the Oxford Street Stadium. Ashcoll’s Mitchel Prendergast (6) and referee Phil Hill look on. Photo Jamie Pitt-MackayAshburton College senior basketball teams produced a winning night at the Oxford Street stadium this week, the boys getting the better of Middleton Grange 82-71 while the girls easily accounted for Kaiapoi High School 72-34.

The boys were behind 35-31 at half-time but a big effort in the third quarter paid dividends and they went into the final period leading 59-50.

The visitors had no intention of giving up though and pushed Ashcoll hard until the end in what was an intense, evenly-contested affair.

Middleton Grange tried to keep Ashcoll’s playmaker Fletcher Arnold under wraps, but that freed up his team-mates to stack up the points. Arnold made 16, as did Josh Lowe and Gareth Hunt, while Mitchel Prendergast finished on 11 and Nick Fechney top-scored with 17.

Coach Pip Johnston said it was a physical and even battle but his side refused to be rattled.

“As a team, they just keep impressing me every week. There’s always someone stepping up, so it was a good team win and should give them confidence.”

The win puts Ashcoll in fifth place in the secondary school Thompson Trophy competition, with two games remaining before quarterfinals. The side travels to Christchurch next week to play Christchurch Boys’ High School and then hosts St Bede’s after the school holidays in August.

College started strongly on defense, led by Year 13 guard Hannah Jerao, pressuring Kaiapoi’s wings into some early turnovers. These were converted at the offensive end of the court, giving Ashcoll a handy 34-18 lead at the half. College kept the pressure on in the second half of the match, holding New Zealand U17 player Helen Matthews to just six points for the game and finishing comfortably with a 72-34 final score line.

College’s outside shooters were in form throughout the game, with guard Sammy Arnold top scoring with 16 points, which included four of the teams eight three pointers.

College’s own New Zealand representatives, Sophie Adams and Ashlee Strawbridge worked well in the paint, knocking in 14 and 12 points respectively.