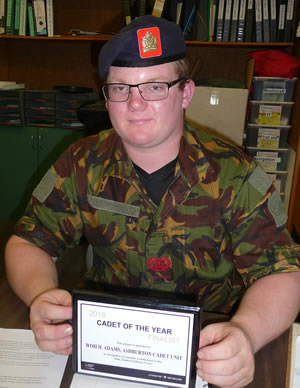 Hayden Adams. Photo suppliedHayden Adams will be an official representative of the Cadet Unit at international commemorations in Belgium to mark 100 years since the Battle of Passchendaele, a bloody campaign that took the lives of hundreds of New Zealanders.
Hayden is a Cadet Warrant Officer Class Two in the Ashburton Cadet Unit and has been offered the opportunity because of his second place in a national cadet corps skills competition held late last year.
Ahead of the October trip, he will undergo strict protocol training and may also have to get exemption from his university examinations to take part in the poignant commemorations.
Hayden's trip will include a visit to the Tyne Cot Cemetery, near Zonnebeke, the largest Commonwealth war graves cemetery in the world.
The cemetery contains 520 New Zealand graves and 1176 New Zealanders are named on the Memorial to the Missing.
Hayden Adams said he was very proud to be included on the official trip.
Initially, it was only the winner of the skills competition who had been given a slot on the fully funded trip, but extra funding had been made available and he had recently been offered a place.
He would travel with Amy Vallance, based with 17 Squadron Air Training Corps in Christchurch, and other chosen representatives.
Full details of the trip were still being finalised, but he would undergo protocol training and would ``proudly'' wear full service dress uniform.
Hayden Adams was a top performer at the cadet corps skills competition held at Trentham in November last year.
One aspect of the competition included a medical scenario that used real amputees and pigs blood and bone to test skills and procedures.
Other disciplines included observation and navigation exercises, physical challenges and a speech presentation outlining reasons why cadets were relevant in today's world.
Hayden also produced a two course ``gourmet'' meal from a standard ration pack.
He received an ``outstanding performer'' certificate and plaque for his efforts.
The trip to Belgium was the ``icing on the cake'' of the whole skills experience, he said.
Hayden Adams joined the Ashburton Cadet Unit at aged 10 and has climbed up through six ranks.
Today he is, in effect, the company sergeant major, and runs the parade, keeps discipline and makes sure the unit runs smoothly.
The first year University of Canterbury engineering student is eyeing up the territorials in the near future and may choose a career as an engineering officer in the defence force.